Of fear, cheese and a shoogly crozier...

Two rants in a row. Never mind, today feels more positive. Largely, that's the doing of two Argyll and The Isles clergy who managed to assuage the wrath stirred up by The Bigot of Ardentinny and the hapless local paper (do they really think about what they print?), so today I'm celebrating that.

We're so lucky. When you have a Dean who can cheerfully put into amusing perspective the lunacy found in some threads of Christianity and a Bishop whose sermons never fail to inspire, it seems almost worth the angst of worshipping on a badminton court (Andrew, I thank thee for that word). And when the local paper's intransigence and lack of savvy releases you from the tedium of writing half-baked localpaperese (I just made that up) after lunch on a Sunday, you find you have the energy to celebrate on your own blog.

So, from today, my mental image is of +Kevin, behind the altar, singing his own descant to "Sing Hosanna" at the top of his voice. There are others - the shoogly crozier at the beginning, the mitre at a jaunty angle as +K waited to be allowed to bless us (we needed to sing first). And it seems from Facebook that there may have been some cheese-throwing; one hopes it was inadvertent, but one never knows.

The local paper, remember, turned down a piece because it was too theological, didn't have enough "news" So here's today's news.

Do not be afraid.

Or a headline? NO MORE FEAR, SAYS GOD.

Good, eh?
Posted by Christine McIntosh at 4:06 PM No comments:

Bigots, homophobes and the love of God

I like living where I do. Most of the time. But today I'd rather have been in my native Glasgow. I'd rather have been with friends on the Gay Pride march - friends I know because of the church. My church, their church. But instead I was here, reading my local paper - for we all do, you know, even when it's depressing reading, because we don't know what you'll miss if we don't read it. I read the letters page, skipping over it to see if there was anything interesting - and came across one that took up more column inches than any of the others, and certainly more than I would tend to have written in my now defunct church reports.

It made me sick. It seems to be an answer to a letter I've missed - maybe when I was somewhere civilised. It's a homophobic rant in defence of "traditional and well-accepted marriage" which dismisses as "meanderings" the words of Desmond Tutu (presumably  "I would refuse to go to a homophobic heaven. No, I would say sorry, I mean I would much rather go to the other place," ) and accuses him of "erroneously" stepping outside "the clear and wholesome directives of his holy book".

In the past I often wished I had a public voice that wasn't dependent on the whims of some editor or - interestingly - newspaper owner. Now I have, and this is what I want to say to anyone who reads either this or the ghastly outpourings from Ardentinny: I do not wish to go to a homophobic heaven either. I wouldn't go near a homophobic church, and I rejoice in the welcoming openness of my own. All Christians are not homophobic (and this sounds like the start of a syllogism, which if pushed to its conclusion might be interesting ...) The teachings of the bible are anything but clear, obviously - because people like the bigot from Ardentinny don't get it. People who think it's clear scare me to bits.

But what is clear to me is this. I worship a God who loves all God's children equally. Equally = the same, each as much as the other, no distinctions made. We are not here to question that outrageous love, but to try to do likewise.

Even when it comes to bigots and homophobes. Hard, huh?
Posted by Christine McIntosh at 8:58 PM 5 comments:

It's Sunday afternoon. Ok, it's early evening, but the idea holds: another Sunday afternoon in which I wasn't writing anything for the local paper. Usually I write a report on what has gone on in our church - either I do it or my pal does it, and we have been in the habit for years now of making sure that one or other of us was able and willing to do this, covering for one another as necessary and getting hold of someone else to do it if we couldn't. But today - no. Pal didn't do it either, though we were both in church and perfectly able to do it. Sermon was interesting and relevant too - for although our American visitor knew it was Transfiguration Sunday, she didn't know where the lectionary had hidden the readings and had prepared to talk to us about greed and God. And this led us to talking a bit about Credit Unions, and how we might get involved ... as I said: relevant.

So why, do you ask, was one of us not spinning this worthy news for the local press?

I'll tell you why. It's my theory that too much contemporary relevance in the business of church triggers some negative response in a publication that still seems to want the churches at least to submit pieces from the "and a good time was had by all" school of journalism. Now, dear reader, I would rather poke out my eyes with a quill pen than write that sort of stuff, and to date I have resisted any pressure - only there hasn't been any. Working on the assumption that most churches tend not to generate any news worth reading unless it's the Good News that we're supposed to promote, we have for years now written as interestingly and cogently as lies in our power about the message of each Sunday's sermon. Sure, we've stuck in things like impending Episcopal visitations - we're having Bishop Kevin next Sunday, folks - but these things don't happen every week. The Gospel does.

A few weeks ago, I submitted a piece concentrating on the idea that the story of the Good Samaritan showed Jesus cutting through the strictures of The Law - a human creation, when all's said and done - and showing how much more important was God's law of love. As the preacher on the day had said, it was radical then and it's radical now. And yes, I had in mind the awful way some Christian churches treat people they consider beyond the pale - but I refrained from spelling it out.

Back came the mail: "We will not be considering your piece for publication as it is too theological."

I didn't ask the hack who contacted me how he knew this, though I did suggest to him that it might simply have been too relevant. There was no reply, and none to my comment that every week we had people tell us in the street, in the supermarket, how much they'd enjoyed reading our reports.

We do these things, I suppose, for publicity. But what kind of publicity do we want to create? If we want our church life to come over as a cosy anachronism of blinkered self-absorption, then I suppose we'd write about how happy we are to have our visitors and the loan of the hall in which we currently worship, and nothing at all of the burning issues of the day that are at the heart of ordinary life. We'd write the same stuff every week, so that we could substitute an old report without anyone noticing, and we'd seem as boring as ...

I could go on. But I don't think I need to. I have a feeling that God, and what God does to the heads of thoughtful Christians, is probably too interesting for  a local paper.

And I feel better now. I've written my piece.
Posted by Christine McIntosh at 6:48 PM 5 comments: 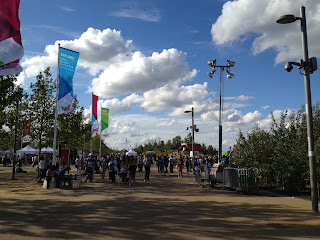 Take a look at that photo on the left. Go on - enlarge it if you haven't got your specs on. See all these people? They're all dressed in summer clothes. See the sky? Blue, with white fluffy clouds. It's summer, right? But this is a summer scene in London, not Scotland, and although we've had wonderful weather for the past couple of weeks (now, sadly, a memory) it was somehow not like this. For a start, there's no sign, either in the sky or in the demeanour of the people, that for a half hour or so it had rained intermittently from a threatening darkness - for the rain vanished as suddenly as it had appeared, leaving the ground and the people seemingly as dry as ever and the air as warm as it had been.

And now, back in Scotland, I try to ignore the rain that has teemed down all day and the depressing gloom that still envelopes the view from the study window and remember how, in the midst of the sun and heat and busyness of the weekend, I kept saying how I couldn't cope with living in London. For all that I was brought up in a big city and for all that I enjoy holidays in hot, sunny places, the business of ordinary life in the heat of a city defeats me. It may make life feel simple to be able to head out for the day in a t-shirt and crops; it suits me fine to wear sandals all the time; everything tends to look better in the sunshine; I can down pints of lager and glasses of Pimms and feel equable and relaxed ... but it's hard work, and even harder when you have to brave crowded trains and hordes of people.

Mind, the hordes were out of the ordinary at the venue pictured - the Queen Elizabeth Park, where the Olympic Stadium is, on its Festival opening weekend. There was a touch of the Orwellian about the journey between station and park: loudhailers told us to keep moving, to cross the road when instructed, to keep going for the festival/station as required, to go through the barriers without tickets or tapping (it's an Oyster thing)... for yes: we all got on the high-speed train back into St Pancras without paying. It was all very jolly and good humoured, and totally exhausting.

I think I've been rusticated ...
Posted by Christine McIntosh at 5:44 PM No comments: