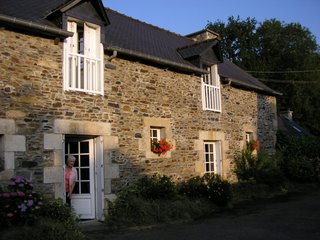 As you will now see, the ferme laitiere proves most agreeable - and yes, we did manage to find it again in the daylight, at the expense of several mobile phone calls to establish which tiny road we were to follow. Pordic is not a one-horse town, but is instead spread on both sides of a minor motorway - hence the confusion, and hence the wonderful moment when in the car of son No. 1, using sat-nav, we drove down an ever-decreasing roadlet until we found ourselves nose-on to a bush, with the dual carriageway a tantalising two metres away: the road layout is obviously comparatively recent.

But this is turning into a deconstructed narrative, and I was bent on the continuous and linear present ..... And so it is, on day two, that we run into a small problem avec l'eau chaude. At what any evening-ablutionist considers bath-time, there is no hot water. There are no noises coming from the tank. We have a sink full of dirty dishes and the mother of the groom wants a bath. There are still lights in the farmhouse across the yard. Monsieur G, he of the short stripey shorts and the green wellies who bears a distinct resemblance to Warren Beatty in his heyday, may still be awake. We phone him. No - I phone him, because I speak French. I know that this burden will fall on me again, and I shall have to make idiotic requests sound plausible and reasonable. Monsieur G. appears. I fear he has been abed - he is wearing checked slippers instead of wellies.

After much French muttering in a cupboard, fetching of spectacles and peering at fuses, he emerges. He has, apparently, put the boiler on "forced marches". It is, he asserts, needing someone to clean it, and to that end a man will come tomorrow and all will be well. Half an hour later, there is enough water for a shower. But - and here I abandon once more my linear narrative and leap forward - we fear he may have been ever so slightly niggardly with his explanations - and perhaps with l'eau chaud. We discover for ourselves the secret of the "forced marches", and the final days of our stay are filled with hot showers and clean dishes. Perhaps we are over-keen on our showers, but we are there to do much socialising and there are many of us - 8 adults in the house on one night after the wedding.