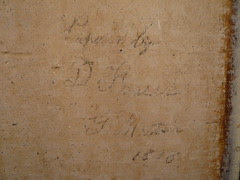 First papering of hall
Originally uploaded by goforchris.
We live in an oldish house. We know this every time there's a leak in the roof, or a chimney head has to be removed because the stone has grown porous. We know this because we've thrown money at the building for the past 30-odd years. We know this because there's a sone-carved date over the centre of the block: 1897. And now we've seen the writing on the wall - literally. The photo shows the earliest decorators' record of their work. "Papered by D. Fraser, G. Morton 1898".

Our hall is large in that it takes 27 rolls of wallpaper to cover it. We are having it decorated for the first time since Charles married Diana - I can remember the painter singing along with the hymns on the telly. That wallpaper, which we've just removed, had become dark and stained and altogether depressing. The paper which preceded it was even worse - grey with a vertical pattern in black and maroon. And I suspect the layer under it may be the one put up by one R. Borland on 27 July 1956 - as I recall, it had a distinctly 50s look to it. But I can't imagine what the first paper was like. I know the woodwork was varnished dark brown - you can still see traces round the door-frames - but was it as dark and lugubrious as I suspect?

I'd love to have a window in time - to go back and see if anyone slept in the bed which appears to have been housed in our bedroom cupboard, to see what it was like when there were only two houses in the block for the ten years or so before they were subdivided into four, to see who lived here then with the range in the back room and some kind of scullery out the back. And the loo was, I think, at the end of the garden. These long-dead decorators have stirred the ghosts for me, and made me feel like a sojourner in my own house.

And I'm having the hall painted cream - though right now it has a yellowish look ....
Posted by Christine McIntosh at 5:28 PM