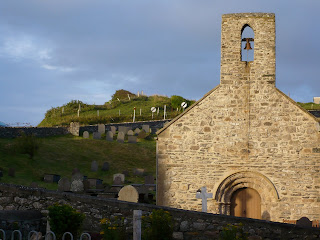 Of course there was no serpent.
The tree's fruit was a mirror,
its temptation reflection.

R.S.Thomas wrote these words sometime around 1990, three years after I discovered his genius for the first time, three years after I wrote what I confessed was no more than a fan letter and was amazed and touched to receive a reply, weeks later. Having sent the letter c/o his publisher, I was thrilled by the extreme Welshness of his address: Sarn-y-Plas, yRhiw, Pwllheli, Gwynedd ... It seemed so remote, so other - and yet here was a poet whose writing had become, as I told him, like a liturgy to me. The poem of which the opening is a part comes from the collection Counterpoint, and I bought a copy in the church in the photo, R.S.'s last charge, in Aberdaron, right at the tip of the Lleyn Peninsula. The sea thundered on the beach outside, the wind whistled round the twin aisles, and I had arrived at the end of my journey.
That journey has brought me through collected poems, slim volumes, biographies, autobiography, film and audio - brought me to a road on which I visited two of his parishes and met two people who had known R.S. One, the kind man who hurried his lunch to open up the church at Eglwys Fach, had gone birdwatching with him. "He was a different man then, quite humorous, but in the pulpit - oh dear! If you went wanting to hear there was no hope, then that's what you heard." And he smiled gently. You could see that he'd been fond of him, this "typical English vicar" who followed "his own interests" and who had hidden so many bits of church furnishing in the boiler room - brass candle stands among them. He'd also painted the woodwork - all of it - matt black, disliking the shiny varnished yellow pine. The matt black remains, and looks wonderful, though it must've given his flock a fright. But the large black electric candelabra remain, put there by R.S. - maybe he thought the candle stands would have been superfluous.
The candelabra reappear in Aberdaron, in Eglwys Hywyn Sant, perched precariously on the edge of the beach, surrounded by a great tumble of tombstones. In this light, airy church I met one of the wardens, a woman who thirty years ago had been married by R.S. I asked what he'd been like - had she found him forbidding? "I get cross at people saying that" she replied. "He wasn't like that at all." She'd liked him, and people found him kind and attentive. Aberdaron felt very far from everywhere, there on the very tip of Wales, with the gales whipping up the Irish sea, and it was there that R.S. found his journey's end, a journey into the West.
But the inner journey went on. Counterpoint is opening new doors for me, as I ration myself to two poems a day - and yet these doors open and I find myself in familiar territory. R.S. famously got into bothers with his description of theology as metaphor, and yet what else can I think? What are we pretending, when we preach or try to share our Good News with one another? What the journey leads to is a greater insight, a greater awareness - of what is now, not of what once was - and whatever we call the greater good that illuminates that journey, surely that is the end to which we aspire?
There is no Trinity
in a glass. The self looks at the self
only and tenders its tribute.
(R.S. Thomas, Counterpoint.)
I shall return to Aberdaron, for there is still much to see, and to the journey ...
Posted by Christine McIntosh at 10:41 AM