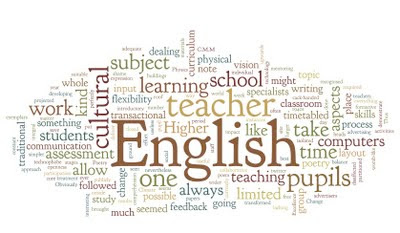 It's that time of the year - exam time, when suddenly the seniors have vanished and the tired teacher has time to reflect but finds she is too jaded to string together new ideas, finds she is thinking of sunlit beaches and cool drinks instead of technology in the classroom. It's still "that time of the year" for me, but now, having retired from the classroom, I find myself thinking about the job I left - and the job I wish I could be doing. This post is the result of that reflection.

Thus began an introductory note, written in the 1940s for Higher English students on the subject of poetry – a wonderful note which went on to demonstrate that although a knowledge of poetry would not clothe or put a roof over the heads of those who knew how to approach it, it was nevertheless one of the most fulfilling cultural activities for students of English.


The question for an English teacher who is sensitive to the need both for the cultural aspects of the subject and for the transactional writing that underpins half the subjects in the secondary curriculum is how to achieve a balance within a revolutionised school curriculum. This is one vision – the vision of an English teacher who has bridged the period between “Projects in Practice” and Higher Still, and who sees Curriculum for Excellence as a half-baked attempt to have a bloodless revolution.

1. Transactional English in immersion learning through a central topic:
If a whole school were immersed in a core topic such as Climate Change, dealing with everything from the Physics and Chemistry of the process through the social aspects and physical impact of change to the politics and journalism of dealing with it, then English writing and comprehension would be an integral part of the study. English specialists would have to be timetabled to be present in the area where such work was going on, to be a constant resource on the ground, to enable the best possible communication and expression of what was being done at all levels.


2. Expressive and cultural input – especially from S3 upwards – in English:
This is where the biggest change might be seen to take place. It would be perfectly possible to deliver the kind of lesson that has always brought, say, a poem to life to a much larger group than has been traditional since the days when partitioned classrooms used to be opened up to allow one teacher to take 60 pupils in time of absence of staff shortage. I’m thinking Big Lesson, followed by group work by pupils with teacher participation, followed by plenary feedback with some kind of projected backdrop showing the results of the discussions. This would free up timetable time to allow for more flexibility.
[It always seemed a waste to me to have a whole year timetabled to be doing the same course at the same time when some of the work was suitable for this kind of treatment. It also seemed a shame for some pupils to be stuck with the one teacher for the two years, say, of S grade, when they could easily have a shot of someone who inspired them. There were often instances of pupils of one teacher coming to another for advice which was lacking in the class they were in]


3. Technology as the glue as well as the instrument:
If pupils were not isolated in the womb-like classroom of individual teachers (I’ll speak for English classes now) for up to 6 hours a week, but could because of flexible working spaces have access to technology and subject specialists when they needed it, provision of an adequate number of computers should be less of a problem – and the maintenance of them might be made simpler if 20 computers were not buried in the room of a cack-handed technophobe who didn’t ensure they were properly functional. I think the formative assessment of students involved in both the cultural and the transactional stages of English could be transformed by their doing all their working-out online, so that both the process and the input of the teacher could be publicly visible (whether in the wider world or on a closed school site). This would save teacher-hours in repeating the same mantras (eg about the embedding of quotation in a Critical Essay for Higher English) and allow learning to take place through study of past materials (something I always did, but which was limited by having limited copies of exemplars). Incidentally, it would also facilitate staff CPD - for teachers are not equally skilled or indeed educated in their field, and the open nature of the work I advocate would allow for continuing but not overt acquisition of new skills. Final work could be submitted on paper if required, but I like the openness and accountability of the blog/ning model for ongoing assessment and appraisal. If twitter or other short-form communication were to be built in to the system, the resulting flexibility would expedite learning, mentoring, teaching, assessment and feedback – and none of these would be limited to the physical classroom or the 9-4 day.


4. The integration of the extra-curricular:
When I taught in Dunoon Grammar School, I ran a very successful magazine. Its operational heart was my classroom where the iMac lived, and almost all the work was done at lunchtimes, after school, and in evenings when we were often racing to escape from the building before it was locked up for the night. But before we were deemed sufficiently successful to purchase our own computer, we relied on the machines in the Business Studies department - a situation fraught with the potential for strife.  It strikes me that if something like The Pupils’ View had been a more collaborative activity, we would have had the Business Studies people onside teaching effective skills in typing and layout instead of fighting over when we could use their computers – and there was much useful learning going on with phone skills, advertising, layout & design, sweet-talking advertisers, selling papers. None of that was ever recognised.


Obviously timetabling and resources, school buildings and staffing are at the heart of this, but it seems to me a way of developing new ideas so that the interesting and purely cultural aspects of the subject are not subordinated. And I have taken no account whatsoever of the matter of discipline and the disaffected pupil.

In my experience, there is a great deal of slack time and wasted effort in teaching as it currently stands.
Posted by Christine McIntosh at 11:13 AM