Today, the Firth of Clyde is calm after a week of wind and rain. The photo above was taken on Monday morning and shows the Argyll Flyer, with one of the Western Ferries in the background, passing Dunoon's East Bay heading for the pier into the wind that was gusting from the south and pushing the waves upriver. Study that photo, for it is one of a series that shows just how alarming this crossing can be even in a sea that is not particularly spectacular. It proved to be the last passenger ferry to Dunoon that day, and two days later it was again cancelled around the same time in much less wind. I tweeted about the second cancellation at the time, and had this response on Twitter from our MSP, Mike Russell:

Now, I appreciate the fact that a response was made, but feel the need to point out that it's not the correct response. Hence this post.

Argyll Ferries ( a subsidiary of Cal Mac) cannot possibly "up their game" with these boats. They are, quite simply, too small. It takes only a very moderate sea to have them pitching and rolling. When they do this, the sea sweeps over the limited deck area - so you can't go out for some fresh air without the risk of drowning. No, you stay in the cabin, unable to see the horizon, and hope desperately that you land before you throw up. Even in the summer, there were tales of mothers having to buy clothes in charity shops for their children who had puked down their own clothes on the crossing, and only yesterday we were told of elderly passengers unable to use the onboard lavatory for fear of falling and breaking a hip - and suffering the indignity of wetting themselves where they sat.

So much for the onboard conditions. But there are many more ramifications. The frequent cancellations mean that people in Dunoon can no longer trust the transport system to get them home if they travel to Glasgow - to work, to shop, to remind themselves that there is life outside the grey confines of their town - by train. There is a spanking new railway station under construction at Gourock, but at this rate few of us will use it, when the only way to ensure that you will get home at night is take your car and use Western Ferries. This flies in the face of all the rhetoric about thinking Green, using public transport if possible, saving fuel and not polluting our environment. As it stands, I would not even think of visiting Inverclyde hospital, which I can practically see from my house, without taking my car: a friend with a newly-broken wrist was stranded in Gourock on Wednesday morning on her way home from the plaster clinic, having just missed what turned out to be the last passenger ferry of the day. She had then to make her way to Western Ferries and have someone meet her with a car. 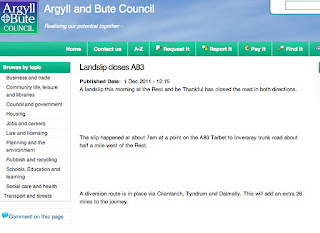 On Wednesday something else happened to confirm my growing suspicions that we were trapped in Dunoon. The road over the Rest and Be Thankful was closed; anyone driving from Glasgow would have an extra 26 miles to go. Last weekend we drove that road, in the fear that the ferries might be off - it's no fun to arrive at McInroy's point and find that you have to retrace your journey to the Erskine Bridge and on into the dark. The flashing lights, warning of increased landslip danger, had us beetling up the road into the hills with the tops of our heads cringing and the full beams on to see any obstacle that might have dumped itself on the road. The journey from Edinburgh seemed absurdly long, a good hour longer than usual in lashing rain and gales.

We realised this week that if this situation had obtained at the time when we moved to Dunoon in the early 1970s, we would never have come here. We realise with horror that a time will come when we are no longer willing or able to drive these roads in the dark - and that time is drawing closer. We feel like prisoners in the town our family grew up in. We have begun to think seriously of leaving before house prices go through the floor. The sad thing is that things were looking up - the number of people living here and working elsewhere, or vice versa, has increased, new houses have sprung up, the approaches to Gourock have improved. Now, suddenly, we've been dumped.

Many people - myself included - seem to have thought that an SNP government would care enough about the people who voted for them to give us a decent transport system. We're told till we're sick that we don't need another car ferry to the town. Fine. The shopkeepers would disagree, but I don't run a local shop and I'll stick to my own perceptions. We may not need another car ferry, because Western Ferries do a great job and run a decent timetable till a sensible time of night. But we do need a bigger passenger ferry, one that can cope with the rough seas and not go off at the first puff of wind. And if a bigger ferry could actually carry some cars just because it's a bigger boat - fine. Good ballast. We have the new pier, the breakwater ... and a couple of pathetically small pleasure boats to use it.

We deserve better. Otherwise this town will die.
Posted by Christine McIntosh at 12:20 PM