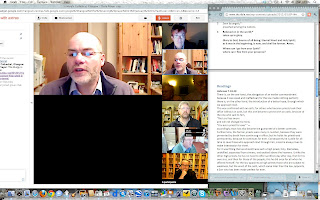 I've just been to Evening Prayer - sharing with people from Glasgow, Edinburgh and Aberdeen without even leaving my study. Google+ has opened up the possibility of online group video conferencing with its  'hangout' facility, and as far as I'm concerned gives a glimpse of how things might be much more accessible in our scattered diocese of Argyll and The Isles. The screenshot shows how it works - the liturgy on my main browser screen, shrunk to fit down the side of the new window that opens when you join a hangout, the participants down the side of the main picture which changes as different people speak. We were all wearing earphones, to cut down on interference, and for most of the service everyone other than the leader and one responder mutes their microphone so that there isn't the feedback of delayed sound coming through as everyone joins in the psalms and responses.

It all works amazingly effectively, even when we all unmute our microphones for the Magnificat and subsequent prayers and give rise to a disconcertingly Babelesque cacophony. As Kelvin remarked, rather like speaking in tongues.

What's not to like? It's free, it's useful, it only requires a decent connection and basic hardware. My earphone was a freebie on a tour of Pompeii and brings the necessary sense of intimate communication to the proceedings. I'm indebted to Kelvin for introducing me to the whole thing - watch this space!
Posted by Christine McIntosh at 5:42 PM