Restoration, in more ways than one. 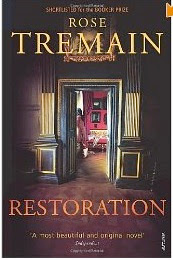 I've recently discovered Rose Tremain - I'm still in that lovely place when you realise that someone whose writing you enjoy has written loads of novels, all waiting out there for another foray - and I thought until a moment ago that I had reviewed The Road Home, which I read in the autumn. This is an entirely modern story, the story of an economic migrant from Eastern Europe whose experience of London gives a new perspective that I - mere country bumpkin that I have become - found not unfamiliar. I triumphed and suffered with Lev, and was eager to repeat the experience.

Restoration was an entirely different experience, except as regards the skill of the writer. Where I had felt sympathy for the Lev, the economic migrant, I began with nothing but distaste for the physically unattractive, bumptious, facetious Merivel, whose infatuation with King Charles II and irrepressible appetite for food, colour and sex seemed to make him a typically Restoration figure. But as I persisted with his story, Merivel's journey towards his own restoration took hold, and the book had won.

Merivel tells his own story, speaking as it were directly and self-consciously to the reader, and Tremain's language throughout is such that I could believe in the historicity of the characters - if there were anachronisms and anomalies I wasn't aware of them. The life of the Restoration period comes alive in all its colour and contradictions, and left me feeling once again how lucky I am to live now. Merivel's original calling is that of physician. As such he is aware of the dreadful variety of ailments that can carry people off, the threat of plague, the fragility of life. The cures he has access to are horrific, and as for childbirth ...

The Restoration of the title is historical, personal and metaphorical. It's a great book. I'm looking forward to the other title I got for Christmas, but I shall save it for a bit. Joy.
Posted by Christine McIntosh at 12:26 PM