Never constituted to be a saint* 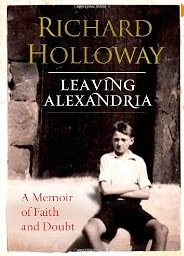 I finished reading Richard Holloway's Leaving Alexandria last week, but was overtaken by sunshine and the desire to be out of doors so that by the time I might have blogged about it I was too tired to make sense - and I feel that Richard himself might have approved of my priorities.

The book is subtitled A Memoir of Faith and Doubt, and while I was reading it I saw a tweet from an acquaintance opining that surely he'd talked enough about both these things. I disagreed - in 140 characters, natch - because it's obvious that both have been a presence for most of the author's life. If something matters, you talk about it, especially if your talking and your writing are fluent and persuasive.

I loved it. I loved the way it conjured up the childhood of the movies and the hills, and I was appalled at the thought of a boy of fifteen going to the school that would turn him out for ordination - or not - at the end of his studies there. Fifteen! Holloway is painfully honest about the guilt that the normal preoccupations of a teenage boy cost him; his description of his struggles with sex seems to hold at once the pity of the older man for his youthful self and the rawness of that self at the time.

The book was enlivened in another way by the familiarity of knowing not only the author but some of the people mentioned, being familiar with Old St Paul's both in the time when he was Rector there and again now, when I also know the house in which he and his curates lived and where that disastrous attempt at communal living took place. I found lights coming on in corners of my memory, of conversations illuminated decades after they took place. I laughed aloud at the thought of the matching donkey jackets, boots, trousers and bicycles, and was glad that the author too seemed to be laughing.

But it is in the defining of faith and doubt that this book makes its mark, and when it reaches the point at which Holloway resigns as Bishop of Edinburgh, he spells out the precise nature of his problem:


I felt glutted with the verbal promiscuity of religion and the absolute confidence with which it talked about what was beyond our knowing. The irony was that in one of Paul's great poems, God chose to empty himself of language and become a life. But along comes Christianity and turns it back into words, trillions of them, poured out incessantly in pulpit, book and on the airwaves, reducing the mystery of what is beyond all utterance to chatter.  (...) Religious language had ceased to be able to convey the mystery of the possibility of God for me because it confidently claimed to make present that which I experienced as absence; though it was an absence that sometimes feels like a presence ...


And then I am back in the words of another hero of mine, the poet R.S. Thomas, and realise that there is only one word more needed from me.

* Leaving Alexandria, p.350
There is a great new review from Ruth here
Posted by Christine McIntosh at 5:38 PM