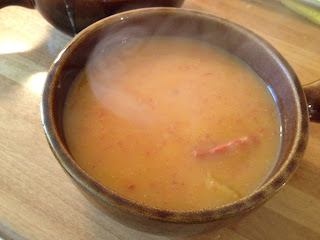 Hmm. Posting this on a day when the sun is shining and it's warm enough to be outside in only one layer of clothing, the steaming soup in the photo seems inappropriate. But on Monday, when the rain was lashing down and I was on my own all morning, I raided the bottom of the fridge and found ... a microwaveable turnip. It had languished there, in its little bag, peeled and ready to pop in the micro, for over a week, forgotten. It had developed an unsightly rash of brown spots. It would have to go. Out of it came this soup, for once I'd peeled off a thin layer the spots had gone. It was joined by three small, bendy carrots and a bit of chorizo that had already been opened ... and this is the recipe:

One small turnip (or neep, or swede, or rutabaga - take your pick)
3 small carrots (or whatever)
one onion
about 3 inches of chorizo
a fat clove of garlic
5 cardamon pods, squashed
a good heaped teaspoon smoked paprika
pint and a half vegetable stock

Chop turnip into 1" cubes, the carrot(s) into bits. Slice onion, crush garlic.
Take casing off chorizo and chop into quartered thick slices. Brown vegetables and chorizo in a little butter in heavy soup pot, adding garlic later with the cardamom and paprika.
Add stock, and simmer for 30 minutes or so.
Blast with hand-held mixer - as you can see, I left the odd bit of chorizo un-zubbed.
Check seasoning and add salt if needed.

There will be the odd strand of turnip/cardamon pod, but the chorizo provides a pretty pink speckled effect and the taste was delicious.