Plotless novel of the religious life 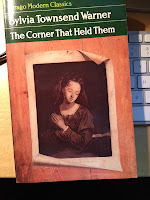 My mother gave me a copy of Sylvia Townsend Warner's novel The Corner That Held Them for Christmas in 1992. I read it at the time with moderate enjoyment; I have a feeling that my life then meant I only read in bed, for I failed to be properly engaged with this, a story of which the heroine is a convent, a story which has no real plot. Perhaps it's necessary to read it in a shorter time, to give it due attention. The convent of Oby, in a hidden corner of Norfolk, was founded in the twelfth century by Brian de Retteville in memory of his wife, Alianor, who had once dishonoured and always despised him. The story opens thus: Alianor de Retteville lay on her bed and looked at Giles who was her lover. Ok, you think, she's going to end up a nun...and we'll follow her story. Great. But it doesn't work like that.

As the back cover of my edition tells us: A good convent should have no history. Its life is held with Christ who is above. History is of the world, costly and deadly ... Yet the events of history carry a certain exhilaration with them. This book is rather like that ideal convent; only it has history instead of heroes. The nuns are human, but they have their eyes on heaven - some of the time. The priest who comes to them as a gift from heaven during the Black Death - is he all that he seems? But soon he is subsumed into the life of the convent; Prioresses come and go; the tower is completed and collapses; nuns die, are disgraced, disappear; the Bishop makes a visitation.

At my second reading - when to be honest I could remember only the beginning from twenty years ago - I loved it. I was completely hooked, finishing it in a rush before heading off on holiday, unwilling to let it wait till I came home. It's like a window into a religious community, one of which you see the start but which will live on once you shut the window again; a walk alongside the often worldly sisters who in their ambitions, squabbles, jealousies and pleasures seem fit inhabitants of this Benedictine convent which was established for such chequered motives.

The period is depicted convincingly, with all its miseries and fears, its discomfort and instability, and the language is convincing without being in any way archaic. "We were interrupted, were we not?" says the prior of another religious house to the prioress of Oby. "By the way, what became of your mad priest?"

I shan't tell you. But if you can get hold of this excellent book, do.
Posted by Christine McIntosh at 6:49 PM