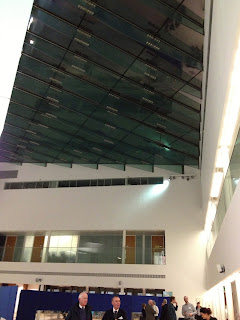 The other evening - well, more like teatime - I attended an Information Evening in the University of Glasgow Medical School, the atrium of whose new building appears left. For several years now I have supported the Beatson Pebble Appeal, and now that the new building is in place, I have transferred that support to work in cardiac and stroke research. Call it enlightened self-interest. An agreeable spin-off from this comes in the shape of invitations to interesting events in the University, of which the other evening was an example. (Sadly, I can't go to the one of the future of print media - I'd be better informed at that!)

I've decided I like going back these days, though buildings like this have transformed the campus from my student days. I found it personally fascinating to sit in a lecture theatre and be enthused about a subject of which I know next to nothing, and to talk to researchers about their work - the two I spent some time with did a pretty good job of making their specialisms intelligible to an ignoramus like me. Clever, enthusiastic, committed people - what's not to like?

I have to add here that I share Mr B's sense of the evening's reminding him of those tales of a pal of a med student who donned a white coat and snuck into an operating theatre only to pass out at the sight of blood - so many of the guests were obviously medics, some of them possibly of Lister's era (I exaggerate, but ...) who had at least a handle on what was happening. I felt the need to preface every conversation with the apology "We're Arts graduates, but ..."

But it made me think. What use had my degree been to anyone? The Medical School is enormous and forward-looking and I'm glad - but I studied English Lit., Early English language, Latin ... cui bono? So that I can use tags like that and know why? So that I can slip bits of Shakespeare or Eliot into a Tweet and wonder if anyone will notice? I know that there are things going on inside my mind that are informed by what I learned all those years ago - but what did I ever do with them, what help were they to my fellow-creatures?

That's where I'm stuck at the moment. It must be wonderful to do something that directly affects life itself. One of the speakers on Wednesday had been delayed because he'd been called away to see a new stroke patient - how good to feel that something you know or propose might mean the difference between that patient's recovering or not. How completely relevant to us all. Does it matter (I ask myself) if that doctor lapses into comma-splice in a communication?

They served some mean canapés afterwards as well.
Posted by Christine McIntosh at 5:26 PM