It's been a while since I last reviewed a book - November saw the last, I think - and I've almost forgotten what I've read since then. However, two of the books are sitting on the desk beside me, mute reproaches, and if I deal with them now they can find a home on a shelf. If there's any room, that is. 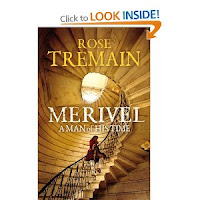 The first of them takes up the story of Robert Merivel, who first appeared in Restoration. In Merivel, A Man of his Time, Rose Tremain shows us a much more mature Merivel, a man in his late 50s who considers himself "much decayed" (ouch) with a life to look back on and one last great adventure to undertake. There is a lover, a trip abroad, a bear. There is the King, now also much decayed, and there is the melancholy of the end of a life imperfectly lived. Merivel is self-mocking and sad, and Tremain and her hero take us expertly through a world in which glitter disguises squalor and favour is given and withdrawn in turn. I was absorbed by the writing and made melancholy by the inevitability of ending, whether of a novel or of a life. So there. 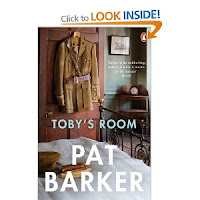 And then I read Toby's Room by Pat Barker. A strange, inconclusive story of the 1914-18 war, of a brother and sister and their friend whose face is destroyed by shrapnel, it is described as "a riveting drama of identity and damage, of intimacy and loss", and "Pat Barker's most powerful novel yet". I dunno about that; I found myself driven to explore some of the history of Queen Mary's Hospital and the work of the artists who recorded the progress of early plastic surgery there, and in some ways I wish I hadn't. Having read the bood some months ago now, I find I've forgotten the conclusion of the narrative and can recall as it were the incidentals - but incidentals that are themselves far more important than any fiction could be. 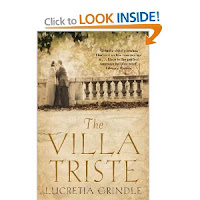 I'd saved up the fat paperback The Villa Triste by Lucretia Grindle for a trip - the other two were hardbacks - and was engrossed by her story of wartime Italy and its resulting deaths in modern Tuscany. The time-switching typographical devices became easy after the first time, and the mystery remained - for me anyway - a mystery until satisfyingly late in the story. I liked Palliotti, Grindle's detective, and I loved Florence and the descriptions of backstreets and Sunday family eating.

And now I'm reading War and Peace, in the new translation. I've read about 200 pages of very small print, and there are another 1000 to go. I'm enjoying it more now than I was at first, having arrived in a War bit rather than the opening Peace section, and I shall certainly say more once I've finished it. Suffice it to say that I've learned from a translator's note that Russians consider the book an easy read, and I'm actually seeing why ... but of that more anon. Just don't give me any more books till I've finished it!
Posted by Christine McIntosh at 9:35 AM