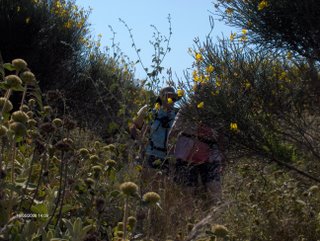 I was involved the other day in a discussion about how choirs learn music. Some well-known choirs seem to teach music by rote; even if the choristers can read music they will perform without it and everyone has to learn rather than read. I was of the opinion that this would end my choral career, as my memory is becoming less reliable by the day, but recalled the struggle I'd had in my youth to master the alto part in Tippet's "A Child of our Time". In the end, I'd learned it - so that now I can sing bits like "We are lost, we are lost" with remarkable accuracy from memory.

Hence today's photo, for which I am indebted to my bro-in-law: at this moment I was far too fraught to take photos. All I could sing was this wretched snippet of Tippet - inside my head, with what I yesterday learned is called an "earworm". We were indeed lost, as this took place on the search for the vanished Cretan mule path now hideously overgrown with strong-scented jaggies, to which I refer in a previous post. And as I sweated and cursed and coughed and spluttered in the pollen cloud I was singing in my head "We are lost .....". In at least four parts. So despite my ability to read music there is still a memory in there - it just doesn't replenish as it used to.

Another ridiculous accompaniment to my hike was the anxious call of "Help, help", which I and my sister actually uttered from time to time. Understandable in the circs? Oh yes. But I had become convinced that in some piece of literature - perhaps children's literature? - there was a creature, possibly furry, who was in the habit of pronouncing the words "Hellip, hellip." To date I have not been able to find the source of this nonsense, though several people when asked have assumed a far-away look and murmered "Mmm ....yes...but ...?"

So if there is anyone out there who can put me out of my misery and exorcise this particular niggle, the virtual Mars Bar will reappear. Until then, I shall continue to murmur "Hellip, hellip" in times of need. And we can't really have that, can we?
Posted by Christine McIntosh at 11:10 AM