Darling? I don't think so 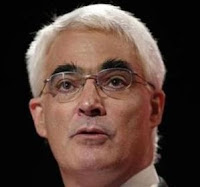 Almost exactly two years ago, I wrote to the then Chancellor of the Exchequer - now, of course, Our Great Leader - more to vent my spleen about Inheritance Tax than in any hope of a sensible response. This is a part of that letter:

Yesterday my sister and I paid a total of just over £££££ [an amount which seemed a very large sum of money to me] inheritance tax/Capital Gains Tax/whatever on our late mother’s estate. In pointing out to you the circumstances under which this estate was accumulated, I am looking for someone – yourself, a minion – to convince me that this is reasonable. As a member of the Labour Party for some 15 years, I am not averse to an equitable distribution of wealth, but have never considered my family to come into the ‘wealthy’ category.

My parents were both teachers in the State System – not much chance to avoid paying taxes there. My father died four years after retirement at the age of 65. My mother, deprived of the companion with whom she might have taken expensive holidays, lived modestly in the family house that they had bought in 1955 in the West End of Glasgow. She had some investments, which she guarded against the possibility of extreme old age and ill health.

In the event, she lived in that house until she was 92, when a stroke meant she had to move into a nursing home. She died a year later. When we sold the house, it made what to us appeared an impressive price – the basis of the estate on which we are now taxed.

How would you have avoided that tax? How should we ensure that our children do not suffer the same burden? And how, finally, will we feel if the law is

changed in the near future to raise the threshold for paying inheritance tax?
Rhetorical questions for a busy chancellor? But this retired teacher suddenly finds herself in sympathy with a group of people with whom I have never before identified. Convince me, please.

He - or rather some minion - did reply, to the effect that, you know, the country couldn't manage without this tax money, and come on, old thing, you're obviously rolling in it. Actually I made that last bit up, but the firm tone of the letter left me in no doubt that without Inheritance Tax the Treasury would grind to a halt.

Do I feel pleased at my clairvoyance? Huh. Will I vote for Flash Gordon's lot again? Your guess.

Posted by Christine McIntosh at 7:14 PM