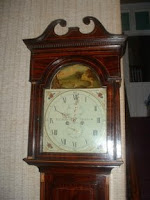 This clock - a long-case clock - has for the past two weeks lain in my front room in several pieces, in order to have the hall decorated without covering the clock in cream paint. Now the decorators have gone and the new stair carpet has been laid and some of the dust and chaos have been dealt with. There is still much to be done - it's amazing how much stuff lives in our hall - but this evening, at 11pm, we decided to put the clock back, so to speak.

And in a clock as old as ours, this means rebuilding the thing. Finding the level floorboards, easing the case into position with the wooden batten at the back resting on the wall, pushing the wee bits of wood under the feet to level it - that bit was easy. The scary bit was putting the action back, with me holding the wooden surround (behind the face) while Mr B (not the son of a clockmaker for nothing) re-attached the weights, which he could only hold for about 10 seconds in one hand, and wound the supporting cables round the grooved brass drums which make everything work (I think). Then we had to poke the stem of the pendulum up behind the dangling weights and attach it, set it going, listen to the tick - and move the hands through all the hours till it struck midnight, because the whole process had taken us an hour.

Now the clock seems to be working and I'm a nervous wreck. Something to be said for a wee digital number, perhaps?
Posted by Christine McIntosh at 12:14 AM