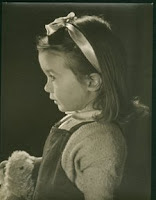 When I was but a little tiny girl – see photo for charming visual aid – we didn’t really make much of a deal of Hogmanay. My parents may have stayed up to sip a decorous sherry, but to the best of my knowledge there were no drunken visits from neighbours, and I was well on in years – well, maybe 13 – before I too could see in the New Year. Later, of course, there were the years of feeling some pressure to be out ‘having a good time” – but the reality never proved enticing enough and it wasn’t till I moved to Dunoon that socialising the night away seemed feasible, with children in tow. Later still, of course, there was the dreadful night when my children seemed to tow me home after too much jollity – but we’ll draw a veil over that.

New Year’s Day, however, always seemed to have a special brightness in my childhood memories. For a start, it always seemed to be sunny and cold, so that a walk in the morning to give us an appetite for our delicious dinner seemed positively enticing. I recall one occasion when it was so cold that the pools of revellers’ vomit were frozen on the pavements, and when my father pointed out with some glee the peculiar gait of the very drunk – a sort of Michael Jackson moonwalk, performed in slo-mo with great concentration and ending in disaster when a change in direction was required. Of course, we didn’t expect our mother to come on these morning outings – she cooked, and I? we? had our father to ourselves, which might just lead to an adventure like taking a shortcut through the coal yard by the railway or an exploratious meander (and that’s a quote) through the woods of Dalsholm park.

I was recalling all this last night as we drove home after the kind of relaxed enjoyment that is possible with close friends, good food and champagne with hibiscus flowers at the bottom of the glass (I know – but it was dead festive). We passed a lone youth in a hoody, sitting on a bench near the deserted stadium in the rain. His demeanour suggested despair, and he looked about 15. Who knows what had landed him there: too much drink, drugs, loneliness, being dumped – or simply a house full of noisy adults he couldn’t bear to face. I’m glad I was so strictly brought up – it made life much easier.

There are actually two literary references in the above. Usual rules apply.

Posted by Christine McIntosh at 5:22 PM