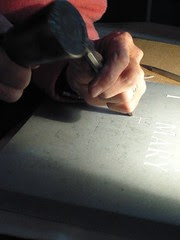 Hands at work
Originally uploaded by goforchris.
Sometimes I wish I did something concrete, something which had a solid presence. Writing seems ephemeral, singing even more so. These hands belong to an artist I spoke to in Dore Abbey, in Herefordshire. She took up working in stone in her retirement, and now has more commissions than she can keep up with. She told me how satisfying it felt - as well as sharing the very up-to-date method she has to rectify any errors, such as the wrong date or a mis-spelling, using stone dust and superglue.

She also, however, sings tenor in a quartet at evensong in her own church. We shared thoughts on the range of women's voices and the effects of aging. She was a remarkably serene and self-aware person, with a humorously self-deprecating manner. As we talked, a choir began to rehearse for a performance that evening. One of them had asked me outside if we'd be around for their performance. "We're very good," she asserted, firmly.

They weren't.
Posted by Christine McIntosh at 11:28 PM