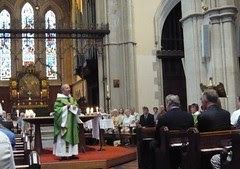 Sermon
Originally uploaded by goforchris.
I skipped the service at Holy Trinity today, along with the organist (aka Mr B) and the only soprano you can hear behind a bus ticket (aka Mrs Heathbank) and took myself off to my native city to receive communion at a Eucharist presided over by Bishop Gene Robinson. Who he? Well, I know there are some of you out there who aren’t Anglicans, but he’s the only bishop in the worldwide Anglican Communion who was barred from attending the Lambeth Conference which is just ending – because he’s gay and lives with another man and doesn’t lie about it.

It was great. You can hear his sermon (and see it) here – thanks to the techno-tendencies of the Provost. And you can read me saying that it felt really good to hear a bible-based sermon which openly addressed the whole inclusiveness thing, not in guarded words for those who know the code, but up front and powerfully. And I felt proud to be a member of the Scottish church which provided the altar of St Mary’s Cathedral in Glasgow for +Gene to celebrate the Eucharist – because he wasn’t allowed to do this in England. At the end of the service, the entire congregation (a big one) rose to applaud this little man who has been through so much at the hands of fellow-Christians. Did it make a difference? I’d say it did. It ran a coach and horses through the prevaricating stuff I’ve just heard on the evening news as the last word from Lambeth, because this was real, this was blessing and celebration and being part of the body of Christ in a meaningful way.

And you know what else was great? The people who turned up. Like blogger Mad Priest: I realise I’d got into the habit of thinking of him as a willowy sap in a high clerical collar and a cassock – wrong, wrong! (His blog has just frozen Firefox for the umpteenth time and caused me to rewrite this post, but I shall forgive him and continue to read him on my feed reader). I know now that if people address me as Chris then it’s because they know me through this blog, and that’s exciting too. I’ve kept up with Bishop Gene’s blog during Lambeth, so in a way I feel I know him better too, even though we didn’t meet.

So, a good day. I’ll take one sentence from +Gene’s sermon which inspired me:
“Let’s continue to be God’s people and let God worry about the Church”. But today the Church – or at least the part of it worshipping in the Cathedral – felt as if God didn’t need to worry quite so much. Not today, anyway.
Posted by Christine McIntosh at 8:28 PM