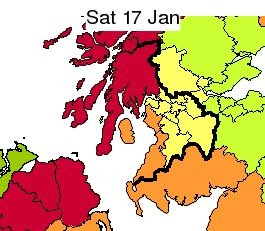 This jolly little map indicates that we're having interesting weather. In fact, the red - which the astute will notice extends over the homeland of this blog - carries the caption "Take action" on the Met Office site I referred to yesterday. I've never actually seen the red over our neck of the woods since I started using the site, and was sufficiently intrigued to check its recommendations. They're actually pretty basic, to do with tying down the garden, putting the car indoors and not leaving your bed under a shoogly old chimney stack. (And if you're wondering: the last instruction is the least tampered with by my attempt at whimsical paraphrase)

What it doesn't warn you of is the danger of carbon monoxide poisoning or insanity induced by the shrieking of the CO alarm. A sudden down-draught from the chimney obviously caused a blow-back of gas-fire fumes; this particular chimney has always been subject to strange currents of air and used to fill the room with smoke in the old days. We've solved the insanity problem by removing the alarm to the hall and we've dispersed the fumes by opening a window - even though that is one of the "don't"s in the Met Office list.

There are compensations, however: I had a jolly time watching cars vanishing under the waves on the shore road at high tide, and noting that not only had someone left a white van parked on the seaward side of the road but also there were people obviously sitting in their parked cars with the lights on enjoying the thrills. I imagine they don't think of all the stones cast up by the waves.

Now it's dark, and we can't see much. The wind has fallen strangely silent in a way I find ominous; I fear it may be a case of reculer pour mieux sauter or something more scientific like the eye of the storm, for more and worse is promised. When I was a child in Glasgow, all I worried about was the possibility of being brained by flying slates off the tenements of Hyndland and Broomhill or the fanlight at the top of the close where we lived being shattered by a chimney pot, but these worries actually existed more in the minds of my parents. I found it exhilarating. Now I know that the worst storms wait till midnight to terrorise us and wreck our sleep, having first silenced the telly so that we have nothing else to think about.

I shall go out in the lull and tie down the garden. Or something.
Posted by Christine McIntosh at 6:27 PM