Whose gate is it anyway? 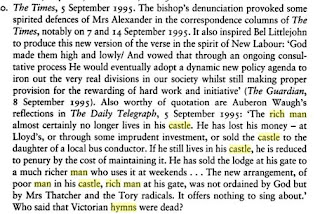 I was thinking about hymns on the back of an irritating discussion t'other day. A rummage in Google - because I was thinking first about the deeply unsuitable words of some Victorian hymns - produced the above which may amuse (though you may have to click on it for it to be legible). All things bright and beautiful may indeed be a pleasant thought, but the absurd social references of the rest of it can either make us laugh or squirm. And Mr B apparently spent many a tortured hour in his youth wondering why the poor man was waiting at his gate because he thought it was his own gate that he was standing at. Waiting for the Lord, perhaps? or for a handout? or for the post? You see, hymn words can trouble the young. Dangerous stuff.

But I digress. The loudest bee in my bunnet tonight is caused by those who turn up their noses at anything written in the last 100 years - or maybe the last 75 years - as "Radio Two" hymns, or "happy clappy" hymns, or simply "rubbish". My especial hornet is reserved for people who say this and are themselves indifferent church musicians, or who think only of the tunes of hymns, or simply cannot deal with the demands of modern tunes because actually they can't play them. In fact, such people tend to make such a hash of any they do play that the piece sounds as awful as they claim, and we're going round in circles.

Where am I going with this? A happy land far, far away? Not sure, really. Maybe I should stick to words for now. Because many modern religious songs actually have much more acceptable words because the authors have been freed from the demands or rhyme and/or regular metre, so they don't have to wrestle with unpleasant poetic diction to fit in, nor seize on tried and trusted rhymes - spirit and merit spring to mind, for some reason: must be the way you say it. So can I make a plea for a more critical look at words, a more honest appraisal of abilities, and a more open mind among those who would choose and perform hymns?

And maybe a thought for the punters who are trying to achieve a prayerful frame of mind?
Posted by Christine McIntosh at 5:56 PM