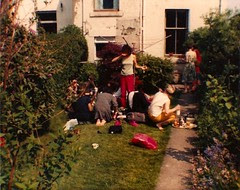 Peacewomen's picnic
Originally uploaded by goforchris.
It’s an interesting experience, appearing in court. Although I’d been a juror in the High Court in Glasgow, it wasn’t really any preparation for the strange intimacy of the local Sheriff Court, where the twenty-seven women who were arrested at the January demo were tried over the weeks after Easter. I’d had a couple of visits to earlier trials – a typical fine handed out would be £70 for painting a CND symbol on a wall, but few of the women intended to pay fines, so were facing a week in Cornton Vale instead. On the day when this photo was taken, however, I was appearing as an expert witness – expert by mere dint of being local, I might add – as well as gracious hostess to a picnic in my back garden for the women who turned up in support of their friends.

It’s fair to say that, unlike the women on trial, I enjoyed my time in court. I had a chance to point out the anomaly that had women arrested for trespassing on American property on one day of the year when at any other time you would be greeted politely and asked if you needed help to find someone. I appeared in disguise, of course – little black cotton dress (with pink rosebuds all over it), black fitted jacket, dark tights, high heels – and smiled at the Fiscal and took the oath rather than merely affirming. (On another occasion the Fiscal and I had played in the same amateur orchestra, but that’s small towns for you). At the end of my first stint in the box, he invited the Sheriff to agree that I was “a charming witness” – a claim which caused loud hilarity in the public benches. And I’m happy to say that everyone for whom I appeared got off, and to express my admiration of these young women who conducted their own defence.

Of course, all this had its downside, and that, I’m afraid, happened in church. Because I’d arranged for some of the women to camp in the church grounds that week, I was denounced (seriously!) at the end of the Eucharist, and before we knew it our church wasn’t somewhere we felt we could go any more. A young cleric, a distinct lack of moral courage, a deeply conservative congregation and some economy with the truth left us stranded. At the time we didn’t see it coming, though hindsight - and a friendly policeman – pieced it all together afterwards. Of course there was a lot more to it than I can possibly write about, and looking back over twenty-five years it seems almost unbelievable. And it is thinking about this that led me to consider what I’d have done with this blog had I been writing it in 1984.

Only thing was: we weren’t on our own. There was a choir. Mr B’s choir. They vanished, along with us. And they deserve another post.
Posted by Christine McIntosh at 7:52 PM