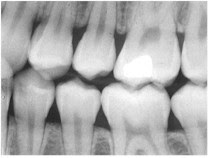 Been a bit obsessed by teeth recently, largely because mine have seen better days and are beginning to complain about my treatment of them. Mistaking an olive stone for a sultana while eating an interesting salad in Tenerife was only one of the mistakes for which I am now paying - both in trauma and, I suspect, in cash.

But it was while I was reclining, somewhat alarmingly, with my head lower than my feet at the behest of the charming 16-year-old who came to the rescue during today's emergency dental appointment, that I began to consider once more the age-old problem. Not, as you might think, the problem of pain, for by this time I'd had so many injections that my entire face felt as if it belonged to someone else. No, the perennial problem in this position - head back, mouth agape and full of implements and gloved fingers - is the problem of spit.

No matter how assiduous the dental nurse with her wee hoover-thingy, the moment she has to turn away to mix minute quantities of some tooth-filling substance I feel that I will shortly drown in spit. The front of my mouth may feel like a dust-bowl, but somewhere around the memories of tonsils there is a sudden rush of saliva - and I have to swallow. Only I daren't, because I have become convinced that stuck down there under my tongue is a lump of filling/tooth/debris which to swallow would mean a slow death. But swallow I must - there is a kind of convulsion, a gagging sensation .... oh no....choking ...

And the twelve-year-old (he's younger by the minute, this one) asks brightly: You all right? And continues blithely to fill, scrape, buff, do unimaginable things with tiny bits of cotton wool (apparently I have some stuck inside my tooth right now) as I make a huge effort to relax and think of the absurd Simpsons poster stuck to the ceiling above the chair. Surely the torment cannot last for ever.

I just wish this child genius had a better taste in music...
Posted by Christine McIntosh at 11:31 PM