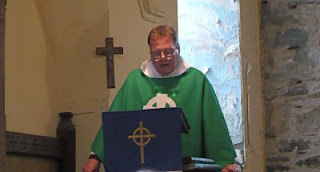 Ever since I became a member of the Scottish Episcopal Church, in the early ‘70s, I’ve been aware that it is regarded by many native Scots as The English Church. “What do you want to go to a church like that for? You’re Scottish!” In Dunoon, it helps the visitor to tell the taxi driver to go to the English church, and in Mid-Argyll certainly you’ll hear at least as many English accents as native Scots ones. 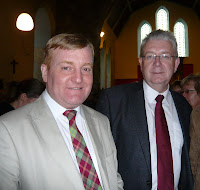 But yesterday was different, and for the first time in my church-going life I felt that I was in a truly native church, with a history and an ethos that was entirely Scottish – and Highland at that. Not the fakery of the dressing-up-for-a-wedding tartanry, but the deep-seated faith of an area which had survived persecution and emerged somehow in the 21st century with much of its tradition intact. The occasion might have been dismissed as mere tartan-for-tourists. But “A Highland Homecoming”, part of the government’s Homecoming Scotland programme, took the form of a celebration of the Eucharist in Gaelic, in St John’s Church, Ballachulish, in the presence of the assembled, international ranks of the Clan McInnes. And from the opening words - Ann an ainm an Athar, agus a'Mhic agus an Spiorad Naoimh 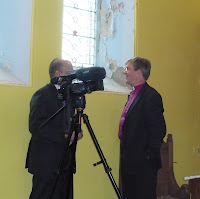 So why was I there? And why did I feel the power of this mass, given that I have about 4 words of Gaelic and none of them were used yesterday? The first is easy: the mass setting was John’s Kilbride Mass, in Gaelic, and he was playing the organ for the service. And the music suddenly sounded as if it had been written for the Gaelic words - A Thighearna, dèan tròcair oirnn. A Chriosda, dèan tròcair oirnn. A Thighearna, dèan tròcair oirnn. The second? Was it the resonance of Emsley Nimmo’s Gaelic, or the haunting beauty of the final music from the choirs – Gleann Bhaile Chaoil? Or was it because Mr B pulled out all the stops (you might say) from his distant roots and moved the entire congregation with his playing of traditional airs á la McIntosh? or the wonderful strangeness of hearing a mass setting I know by heart to words which were completely unfamiliar?

Actually I think it was a mixture of all these things, and more. And the more was symbolised, I realise, by the presence on the altar of the Appin Banner, a replica of the pale blue and gold flag which was rescued from the carnage after Culloden and returned to the area of Portnacrois and St John’s, the only banner not to be taken and burned. And the chalice used was the Appin Chalice, reputed to have been carried by the Appin Stewart Regiment in the uprising of 1745. How could I not feel the tie to the past, the essential roots of our church? 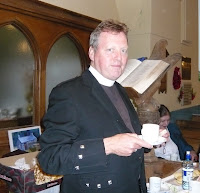 Afterwards, there was an incredible bun-fight. I don’t know how we managed it, but despite the teeming rain outside and the two portaloos in the grounds it was accomplished that people got tea and scones and cakes – and the most wonderful clootie dumpling I’ve ever tasted. The politicians – Mike Russell, Culture Minister in the Scottish Parliament and Charles Kennedy, the local Westminster MP – posed for photos and chatted amiably; Bishop Martin was interviewed for the telly – a camera had woven in and out throughout – and the Dean of Aberdeen & Orkney, Emsley Nimmo, fortified himself with a scone.

This, I realise, reads like a mixture of piece for the magazine and personal blog post. This is because my last blog on a diocesan event was transplanted wholesale into the diocesan mag, and must have confused anyone who didn’t know of its provenance. So here’s the wee blogger’s coda…

When we emerged into the rain which had been gathering in malevolence during the service, we were both shaking with knackerdom. We still had the drive home to Dunoon, through the looming and more or less drowned Glencoe, and I had a picture of us sleeping by the roadside. I even thought longingly of sailing into a hotel and ignoring the lack of a toothbrush. But whether it was the adrenaline of a successful gig which kept Mr B at the wheel, or the recounting of the interesting contacts I’d made during the afternoon, we kept going and made it in 2 hours flat.

Personally, I think it was the clootie dumpling …

Note: Photos from the event can now be seen here
Posted by Christine McIntosh at 4:50 PM