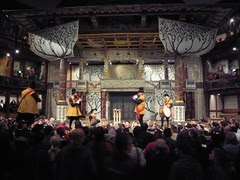 Love's Labours Lost
Originally uploaded by goforchris.
I know I've blogged about this already, but I needed to return to the experience of the Globe Theatre and Love's Labours Lost when I didn't have a cat's bottom distracting me by hiding the screen, to say nothing of the typing paws.

The thing is that in all my life I've only once been to a performance of a play by Shakespeare that I didn't know already, and that was so long ago that I have only the vaguest memory of it. (I think I was still at school, and it was at Jordanhill College and may have been As You Like It) And it struck me forcibly that much of what I get from a performance of, say, Hamlet, comes from anticipation and speculation: how will the Ghost be treated? How will they stage the prayer scene? How will Hamlet say the big soliloquies?

Think of the Olivier film of Hamlet. Olivier took a part of one of Hamlet's speeches about the King's behaviour and used it as a voice-over for the very beginning of the play, so that the words about "particular men" who, "carrying the stamp of one defect", "take corruption from that particular fault" and so is brought to disgrace. The whole slant of the character of Hamlet is changed by this, as he seems to be talking about himself in a way that would suggest he is very aware of why he is unable later on to kill his uncle - and yet his soliloquies show that he cannot understand his difficulties.

I've gone into that simply to show how very different the experience of a play is to someone who has studied it for years - and to wonder what Will himself would have thought of such a reaction. Maybe he'd have torn his hair out, maybe he'd have been puzzled. But it was fascinating to try to "keep up" with an unfamiliar play, without benefit of the text, and not find myself laughing at something several lines too late. I noticed an earnest fellow in the row in front of me poring over the text as the play unfolded - but felt he was missing more than he gained.

Enough. No more. 'Tis not so sweet now as 'twas before - and I've gone on long enough. The words of Mercury are harsh after the songs of Apollo: You that we; we this way.
Posted by Christine McIntosh at 4:48 PM