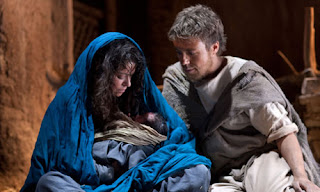 I was looking for an illustration to this post when I came upon this story. Apparently the BBC production which has just ended, The Nativity, is being attacked as being anti-Jewish. I didn't clock that, but after wondering early in the week if this drama was going to work, despite the appealing casting of Mary and the atmospheric setting, I found tonight's climax extremely moving and well done.

I suppose the difficulty is that the story is so well known. How do you explore the characters of people who have been household names for 2,000 years? And we know the ending, don't we? How do you surprise and grip an audience with the best known story in the Western world? (I think I'm being careful here). In the end, I think they did it by concentrating on the humanity of Mary and Joseph, on Mary's extreme youth and Joseph's understandable misgivings. All these dreams - who among us wouldn't say "It was only a bad dream" and sulk off? Did you not find yourself begging Joseph to take Mary's hand as she begged him? Did you not sit up in your seat and will them to find somewhere to stay, even though you knew they would? Suffer through that labour in the filth of the stable? Smile "At last" as Joseph reached for Mary at the moment of birth?

There were moments that took me outside the circle of the drama: I couldn't take that quietly-spoken Irish Gabriel, and I wanted wings like drifted snow and eyes as flame, not to mention the heavenly host. I kept spotting Tucker under the admirable strength of one of the Magi, and I marvelled at the awfulness of Herod with his pale eyes and the ghastly sweating illness that perhaps Art Malik might have cured if he'd still been at Holby City. But these are the dangers of all dramatic production, and my willing suspension of disbelief kicked in with a vengeance tonight.

And I loved the gradual convergence of planets and star to form that wonderful celestial light at the critical moment, shining down into the mess and confusion of a shed full of troubled shepherds and men who had travelled such a long way. This birth was hard and bitter agony for us ...


Maybe the controversy arose because there is no way of telling this story and making it blandly acceptable to everyone.
Posted by Christine McIntosh at 11:34 PM