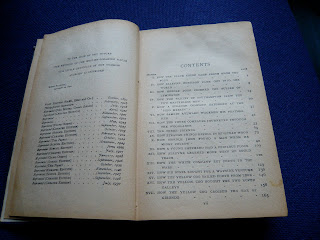 AS I start this post, I notice that the photo accompanying the one about +Kevin's consecration has vanished. I hope it's a temporary affliction - Flickr has been a tad flaky these last couple of days. Today, however, I am considering a much more resilient medium - my mother's ancient copy of Conan Doyle's The White Company. If you're not familiar with this mediaeval story, take a look at the chapter headings and you'll get a flavour of the tone of this, the original story about Sir Nigel Loring to which Sir Nigel was a prequel. (Did they talk of prequels in the late eighteenth century? I think not)

The left-hand page bears this dedication: To the hope of the future, the reunion of the English-speaking races, this little chronicle of our common ancestry is inscribed.
South Norwood, September 29, 1891.

This last information, incidentally, is particularly interesting to me now because of the fact that members of the greater Blethers clan now live in South Norwood; I try to picture Conan Doyle among the older houses there, perhaps using the same railway station that we frequent on our visits.
I'm not going to tell the story. You can buy it on Amazon if you're interested. And I've already gone on about how I read this stuff before I was ten, no doubt becoming in the process the finicky dinosaur I now seem to be. But what struck me most powerfully in this latest reading of it was the dreadful injustice of the class system of the time - the lordship of the Norman rulers, the haughty king who didn't deign to speak English, the automatic assumption that the squire of gentle birth would ultimately earn his spurs and his knighthood while the brave archer who saved everyone's bacon time and time again would marry the innkeeper woman who had looked after his feather bed and stagger about in his old age (about 50) and chase the pretty girls while the aged Lord Chandos would ride to battle in his late 60s and die gloriously.

Even worse was my realisation that in my childhood I accepted this hook, line and habergeon (go on - look it up). When the Jacks, the poverty-stricken country French, storm the castle of Villefranche in an episode that I used to be too scared to read in bed at night, they are described as bestial and sub-human, and their assault on our noble heroes seems shocking and an affront to the natural order of things. But did I notice, all these years ago, how Doyle sets the framework for the episode? The wife of the Seneschal of Villefranche describes how ugly the people are, how she "cannot bear it" and so "my trusty Raoul goes ever before me with a cudgel to drive them from my path" - to which her chaplain murmurs "Yet they have souls, fair lady, they have souls!" He is quickly slapped down, because the Seneschal has heard "that you have said to them that their souls are as good as ours". It were better, he goes on, if the priest were to stick to saying Mass.

I fear that as a nine-year-old I probably skipped through this bit to get to the awful moment when the body of the squire is dangled outside his friend's window in the dark. But I'm really glad I've re-read it, seen more of what was implied, realised that it's not just a tale of derring-do. I probably won't read it again.

Life, as they say, is too short.
Posted by Christine McIntosh at 12:02 PM