And God saw that it was good 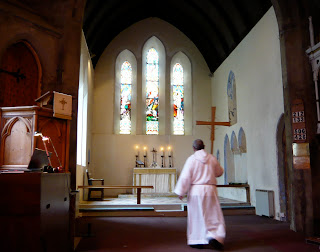 Here we are again - back in Holy Trinity for Trinity Sunday. The service has just ended, the crucifer is returning the cross to its stand, the candles are still lit. The flower power people are on holiday/sick, so there are no flowers, but that's fine. The aged seats from the long-vanished La Scala cinema (now the Dunoon branch of Mackay's) have gone from the sedilia, having finally succumbed to the damp, and have been replaced by  hassocks, and the carpet, though cleanish, now shows clearly where furniture has preserved its original colour. Obviously there is still much to be done.

But I couldn't help noticing the huge lift it gave us all on this, our Patronal festival, to see the light streaming in above the altar once more, after the weeks shrouded in tarpaulins, and the increased resonance of the organ as it banished all memories of the little keyboard Mr B had to play while his organ (hush!) was swathed in dust sheets and polythene. And there was an added frisson, for me at least, in realising during the long OT lesson - the entire Creation story - that I could hear Mary's voice at the back of the church, where the children have their Godly Play until we can accomodate them in the tower (not as bad as it sounds), echoing in a whisper the words of the story: "And God saw that it was good".

I think God would perhaps see that today was good.
Posted by Christine McIntosh at 11:48 PM