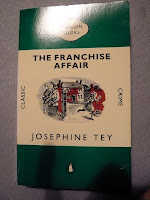 I've mentioned before how wonderful old Penguin books are for travelling. Compact little things, with small print and little in the way of fanfare or decoration, they are just what is needed for a train journey to Glasgow, or even - as recently - a trip to the hairdresser, involving, as it does for me, a rather chancy ferry service and subsequent irritating waits when I've just missed one. The book on the right, Josephine Tey's mystery story The Franchise Affair, has been back and forward across the Clyde several times, resulting in a certain degree of dog-earing and culminating in yesterday's trip to wait for Mr B in Inverclyde Hospital. It was there that I finished it, and was so aware of the loss of my distraction that I began to make a nuisance of myself ...

But I digress. This is another book that's been on my shelf for years, and I don't know why I never got round to reading it. Published in 1948, it would have been completely contemporary in its language, mood and setting - former soldiers in all walks of civilian life but possessed of unlikely skills, life in a small English town returning to quiet normality, church and tea-shops the centre of life and gossip. The mystery concerns the accusations made against two women who live in a dilapidated big house, The Franchise, to the effect that they kidnapped and beat up the fifteen-year-old girl who accuses them. The burden of helping them falls on a local lawyer, whose quietly contented life is changed for ever as a result. The story was apparently based on a similar event from the 1800s.

I find it hard to pin down what makes me so sorry to have finished it. The language is quietly perfect, the descriptions of life in Milford, 'where the last post goes out at 3.45', effective and completely suited to be the voice of Robert Blair, bachelor, golfer and the senior partner in Blair, Hayward and Bennet. The details describe much of my childhood, so that the women in their hats and gloves step obediently into line and the subtle differences in class and breeding are as soothing as they would now seem hilariously anachronistic. Perhaps it's simply the business of feeling safe in a novel - safe from grammatical blunders as much as from any device of the plot.

The detection side of the story is less complicated and less requiring of any genius on the part of the main protagonist than many, with the result that once the last piece fell into place the result was a forgone conclusion, but the characterisation and the subsequent lives of the women and Robert himself were of sufficient interest to keep me gently involved. The novel seems at some time to have been made into a film, and I could see it being a TV series that would pander to the Downton audience (I know - there are 30 years between them, but ...). It is, however, the book I have enjoyed so thoroughly. I'm glad I discovered it, lurking there ...
Posted by Christine McIntosh at 6:25 PM