Another for the suitcase 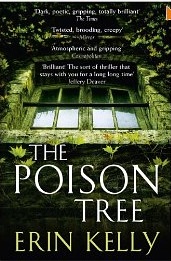 I've just finished Erin Kelly's novel The Poison Tree. If you follow the link to Amazon, you can watch a short video of the author talking about the story and the impulse behind it, so in a way all I need to say it that I found it gripping, well-written and alarmingly convincing.

It's set in 1997 London and ten years later in a house on the Suffolk coast, and it is only now, as I start to write this, that I remember the Prologue that I read a couple of weeks ago, and how it set up the tension and mystery that persists throughout that long hot summer (was it hot in Scotland? - must check) and resurfaces in the later time period. This is a coming-of-age story, but it is also the story, ultimately, of a woman who has everything to lose and the strength to protect what she loves.

There is murder at the heart of the story, but until it happened I was unable to predict who would die and how. I was sometimes unable to read it at bedtime - I try to avoid over-stimulation past midnight - but I knew I was drawn into the life in the big house beside the wood and the recklessly amoral life of Biba who befriends the narrator, Karen. Kelly manages to demolish the intervening years, no matter how many, to revive our own time of hedonism and irresponsibility, whether in the '90s or - as in my case - the '60s, though on reflection I recognise my own relief at not being stranded in a life of sex, drugs, rock & roll by simple virtue of living at home. The seductive nature of such freedom and its corrosive effect creep out of the heat and the haze of spliff-smoke, all of which vanish like smoke after the evening of murder and its results.

The Poison Tree ends in the dark, in the wind, in the cold. There will be life after the story ends - but Karen is no longer who she was, in more ways than one.

Great for the suitcase.
Posted by Christine McIntosh at 1:33 PM