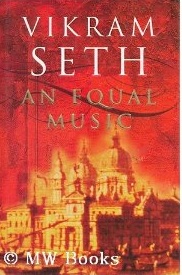 A couple of weeks ago now I finished reading Vikram Seth's An Equal Music - though if I'd read the review published on the Amazon page to which that link takes you, I don't know that I'd have bothered. This book is another of several lent to me by a good friend who knows my taste to such an extent that if she thinks I'd enjoy one I tend to give it a go, and so came to this book cold, as it were, with very little handle on what it was going to turn out to be.

It's a story of music, of love and of loss. The hero, Michael, plays second violin in a string quartet, and though he has a girlfriend - who is a less than satisfactory pupil on the violin - he is filled with regret and longing for the girl he loved when he himself was a student. So in that respect it is a love story, in which I felt he involved himself almost without will, as if he was unable to prevent any of the actions he took after seeing Julia on a London bus. It is significant that it is not the bus he is on at the time - they are bound in different directions and the tension of the situation builds gently but inexorably through the story.

The main player in this novel, however, is music. The tension between the members of the Maggiore quartet rings true, their individual temperaments as taut as the strings of their instruments, the differences between them sublimated in their combined music or - occasionally - wrecking it. I felt I knew these musicians and their constant preoccupation with their art, the way everything is seen in terms of how it will affect their music. When Michael is threatened with the loss of his violin, it is like an impending death; when a fridge in the house where they rehearse makes a noise somewhere between two notes it is identified and it disturbs. Bells sound a perfect G and music enters dreams. And when the Maggiore decide to play Bach's The Art of Fugue it takes over their lives.

The sense of loss permeates the story from the start, although at first I was not sure whose loss it was going to turn out to be. I'm not about to give away this most telling feature, but it works. Seth has brought off the feat of writing about music in such a way as to convince someone who is involved in music-making. And that is where I'll leave this deeply satisfying book.
Posted by Christine McIntosh at 12:06 AM