Lilacs out of the dead land 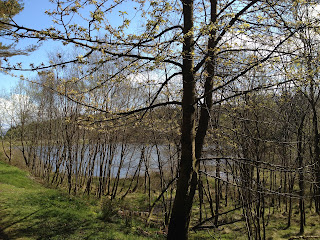 April is the cruellest month - you bet it is. These light, chilly days, the sudden glimpse of primroses by a burn or a lone violet amidst a tangle of dead bracken: all these bring a curious mixture of hope, cheerfulness - and the sense of life passing. It's the cyclic thing again; the more uniform mid-season times, like a perpetual Trinity season, perhaps, make one less aware of the passing of years, while the sudden exclamations of delight over the signs of the season trigger transience all too readily.

I can remember with unlikely clarity being fifteen or sixteen at this time of year. We used to take days away from the city in the moveable Easter holidays of that time - mostly train rides to Helensburgh or Milngavie or Balloch, with at least one remembered trip to Dunoon. We didn't have a car, and all four of us went together - there was no question of staying at home to swot for O-grades or whatever. But what I most remember is the sudden sense of self - the scent of my own, slightly tanned skin, overlaid slightly with the first perfume I had ever owned, combined, bizarrely, with the small horror of a new smallpox vaccination on the scar of my infant one - for that was the era of a sudden requirement to have a valid vaccination certificate if you wanted to travel abroad, presumably because there had been an outbreak of smallpox in the UK such as the one described here.

I remember I went with a friend to my first ever opera at this time of year, and within four days of vaccination. I saw Bizet's The Pearl Fishers, and during it my arm began to itch ferociously and I began to feel distinctly odd. When I read the possible complications of vaccination here, I don't wonder at the latter, but at the time it was a matter of a disprin and getting on with school work.

So - a sudden welter of memories brought on by a bright day with nothing else to think about. Larkin's description of the lighted rooms inside your head  slips unsought into my own head, and I nod yet again to the poet's adept nailing of the minutiae of life. It's as well that normal life is full of music and people and books and East Enders ... did I mention that in these days we didn't even have a telly?
Posted by Christine McIntosh at 6:52 PM