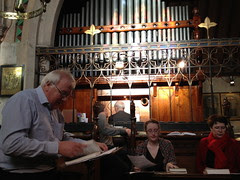 And this is a mission tool that every charge can operate. Smile, children, smile ...
Posted by Christine McIntosh at 5:43 PM