The men in the radio 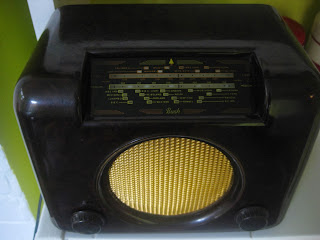 We were listening to music on the radio the other night - hardly surprising; we do this every night in life - and for some reason discovered, Mr B and I, that we had both as children pictured tiny musicians inside the radio every time an orchestral concert came on. In these days, of course, there was considerably less music to listen to; the Third Programme didn't come on until after 6pm (heralded, I recall, by the wonderful theme used by Britten in his Young Person's Guide) and I went to bed shortly after (we're talking the 1950s here). Later, thanks to the acquisition of a more modern radio, I discovered Radio Luxembourg and pop music, though that was only audible after dark. (Don't ask me why; I suspect it may have something to do with Physics.) In the light evenings, you could barely hear Elvis through the static. The nostalgia trip was completed with the joy of finding a photo of the radio we had in the kitchen - can you not just see the tiny musicians, in their evening tails, ranged behind the golden cloth front?

We both hated, I discovered, the singing on "Listen with Mother" - on at 1.45 every weekday. I can still hear the voice of Daphne Oxenford in my mind's ear. The man who did the duets with Eileen Brown  ("Hob shoe hob ..." - aargh) was known as Uncle George. How sinister. You can see we had a fascinating ramble into our childhoods, separated by the width of the country but strangely similar in some ways. 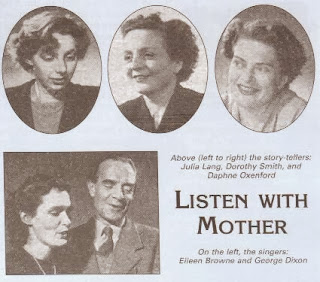 Another moment of nostalgia, absolutely nothing to do with the above, came with the remembering of how I came to know what someone with a broken collar-bone might look. (If you follow me on Facebook or Twitter you'll know why I was speculating). There was this book, you see, a "Teach Yourself" book, on home nursing or some such terrifying area of self-improvement. It was blue, but apart from that looked like the book on the right. I think there were photos in it, but there were also the most terrifying line drawings, showing you how to bandage such injuries

as a fractured jaw, a fractured thigh (horror!) and - you've guessed it - a
broken collar bone. You would recognise the last injury by the forward
droop of the shoulder and limb, I recall, and the face of the victim would,
according to the illustration, bear a face of patient suffering. As I spent
quite a lot of time in the post-war years being ill with such things as measles and whooping cough (the first child caught everything. I was doomed) I tended to read anything that came to hand - and this book was one of the most gripping.

Another book I recall being horrified by was a collection of prints of work by war artists, the most worrying of which showed the aftermath of an air-raid. But my post-war traumas (not brought on by anything but my parents' conversations and the sight of the land-mine destruction along the road; I'm not that old) belong, I feel sure, to another post ...
Posted by Christine McIntosh at 6:57 PM