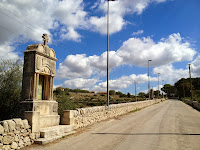 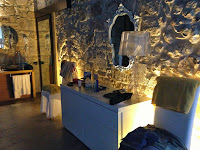 The real journey in Sicily began in a car. A not-very-comfortable, faintly tatty Fiat in battleship grey. We picked it up at Catania airport, drove south for 40 minutes, saw the red oil warning light, stopped at a petrol-station cum café. Several phone calls and a coffee later, we drove back to the airport, to be told all was well and it was the computer. We drove off again. The picture on the left shows the last stretch of two-way road, with a wonderful set of stations of the Cross leading to an imposing - what? Church? Convent? Sanctuary? (it was called that). After that, the road became single-track, without passing-places, rounding a gorge and crossing a worryingly small bridge until I suddently recognised the road I'd followed on Google Earth. We found the entrance, dogs barked, I phoned the number we'd been given. How did we get in? 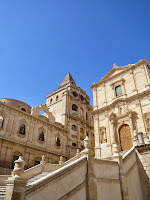 But we did. We had arrived at Borgo Alveria, a collection of buildings on the site of an ancient monastery, destroyed in the earthquake of 1692 but rebuilt using so many of the original stones that we kept finding stray heraldic devices in the middle of the garden wall, and bits of pillars randomly deployed as garden ornaments. Our room (above) was amazing: I could have climbed some of the walls, and the bathroom was a cast iron cube in the corner with a glass ceiling through which you could see the rafters of the entire room. At night, lights came on in the grounds until midnight; after that it was dark and totally silent. During the day the most noticeable noise was that of the cicadas. It was blissful.

There were two Notos in our area - the baroque town twenty hair-raising minutes away by car (see above) and the other, Noto Antica, which was ten minutes from our door on foot. It wasn't just because we could walk there that I loved the latter - a whole walled town, destroyed by the earthquake and just left there, the inhabitants told to abandon the shanty town that they made in the aftermath of the destruction and some of the stones removed, as far as I could determine, to use elsewhere. We walked for hours among the vegetation that would suddenly reveal the shape
of the Jesuit college or some great palace, and we saw hardly a soul. 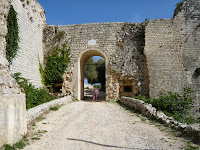 The picture on the left is of the partially reconstructed Porta Aurea taken from inside the gates, and the one below of the castle and prison to the left of the gate inside. I fear we were perhaps odd in our attitude to our surroundings - we preferred walking in the wooded area around the ruins, a sort of natural parkland which started opposite our front gate and wandered down towards the old city through a variety of trees - eucalyptus, conifers - which smelled wonderful in the sun. There were wild goats that popped up to look at us, cicadas by the thousand in the trees, birds singing and sailing 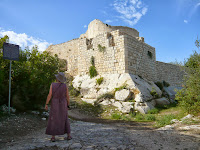 above us, and lizards darting everywhere.On Sunday the stone tables and solid BBQ areas near the road were thronged with families enjoying a day out together - some of them stayed for hours, and the small children played quietly or slept in shady corners while the men did manly things with fires and grew increasingly vocal. We didn't walk in the woods on Sunday ...

We did make a couple of excursions. We felt people might remark our oddity if we didn't see anything but our immediate surroundings - would they think we should just have stayed in Scotland? So we drove to Ragusa Ibla, a four-hour drive for two hours in a town that
apparently features in Inspector Montalbano. We missed the best road 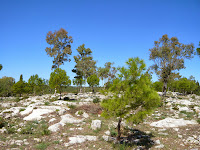 on the way there - the sign for it was hidden in a tree, a common feature of route-finding in Sicily - but persevered over a massive viaduct and through the fringes of the modern town till we found the proper car-park, with the steps up to the old city just as we'd been promised. This was another earthquake story, except that the inhabitants of the old town of Ragusa insisted on staying put. We also spent a fascinating day in Palazzola Acreide, where extensive Greek ruins sit on top of a hill, in Akrai. And yes, it was to Akrai that we toiled up the hill in the midday heat, and we spent a wonderful time wandering round the Greek Theatre from the 3rd century BC and various catacombs and carvings. 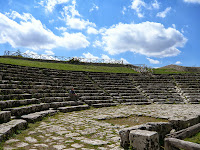 A common feature of all our jaunts was angst about the car. Not only did the oil warning light stay on throughout the week; when we were in Palazzola Acreide - actually in a sort of housing scheme on the outskirts, where we had originally thought of abandoning the car because there was plenty of parking space - we discovered that the footwell on the driver's side was ... wet. Very wet. Wet and slippery. After a brief period of panic we decided it was water from the air-conditioning, which we ran constantly. Its jet must have become blocked. We never found out. And then there was the matter of where we left the car. Our first trip down to Noto saw us more or less abandoning it in the second street we passed that seemed to point in the right direction. We had walked two blocks downhill when the thought struck us that we might never find it again. Back we toiled. I took its photo. I noted its number on my phone. I dropped a pin on Google Maps, thereby discovering the name of the street - for signs with this helpful information are rare. And we noted that the building we had to pass on our return seemed to be a prison, housed in a former monastery. I took to following this routine every time we left the car anywhere. A dusty grey Fiat in Italy is hardly a stand-out, after all.

That all sounds very stressful. I know. On day one, it was. But by the time we left I felt sorted. The sun shone, the mellow stone was the perfect colour, I discovered granita, my Italian, supplemented by French, seemed to be working. The car was never comfortable, and the road was always a challenge, but our hilltop Borgo was heavenly and the company right up our alley. When we snuck out in the rosy-fingered dawn (Homer was right, by the way) I didn't want to leave.

I'd have wanted to leave even less had I known how we were going to get lost finding the road back to Catania, and the twelve-year-olds on the moped who finally got us back onto the right one, but that's another story ... 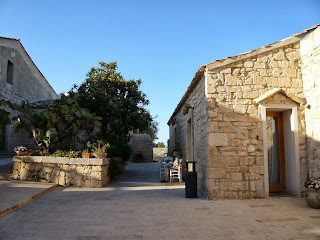 Posted by Christine McIntosh at 6:44 PM