War and Peace and the new translation 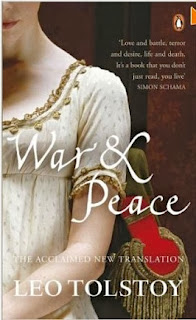 I've done it. Another of the imperatives crossed off the list, which only means, presumably, that I draw closer to shuffling off this mortal coil. Yesterday I finished reading War and Peace. It's one of these questions, isn't it - perhaps when there was nothing one wanted to read: Ah, but have you read War and Peace? And now I have. And?

And now, for a start, I can feel able to read something else. This massive tome - for I was reading it in the new paperback, single-volume edition illustrated here - has dominated my reading, threatened to topple off the pile on my bedside table, weighed down my overnight bag when I travelled for literally months now. When I travelled abroad on holiday I took holidays from Tolstoy and read other stuff on my Kindle, but all my home reading has focussed on Russian gentry and the laborious prose of Anthony Briggs' translation. I suspect you're getting my drift now. I shall speak plainly.

I asked for this version because I read things like this: 'This is the best translation so far of Tolstoy's masterpiece into English. It achieves the difficult feat of combining faithfulness to the original with smooth, idiomatic English. The result is a triumph of cultural mediation' – Robert Maguire, Professor of Russian, Columbia University, New York. 'If you haven't already read War and Peace, there's no better time to do so' - Vogue. And I was convinced, because the neat little 3-volume Oxford World Classics edition that I had inherited insists on having the pronunciation marks for all the Russian names every time they appear and I thought it would drive me mad. I chose a book rather than a Kindle edition because it had a dramatis personae that I could flip back to when confused (frequently), despite the knowledge that it would break my nose if I fell asleep reading it.

But I'm perplexed. How can anyone - except, perhaps, an American - think it acceptable to keep saying that characters 'coloured up'? As in 'Countess Marya coloured up'? What, pray, is wrong with 'blushed'? (It's repeated so often I found myself cringing in anticipation). I find myself looking through the World Classics edition and noting that the slightly old-fashioned language (this translation, by Louise and Aylmer Maude, dates from 1933) seems to suit the narrative better; I read in the notes to the version I've just read that the Maudes lived in Russia and had actually consulted Tolstoy himself, who claimed that 'better translators could not be invented', and wonder why anyone else would undertake such a thing. 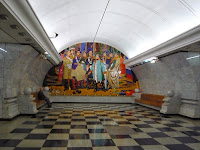 And the novel itself? The novel that Tolstoy apparently said was not meant to be a novel at all? It drove me crazy several times, primarily in the conversations and social manoeuvrings of the characters in peacetime - all these soirées and balls. I enjoyed, if that's a suitable word, the descriptions of battles and the retreat of the French from Moscow. I pictured the mural in the Moscow Metro which showed the nonplussed Bonaparte's bafflement when he found Moscow deserted and open, and felt I had learned more of the background to a culture I find fascinating. I hated the over-use of adverbs and the repetition of adjectives - 'His handsome eyes were shining with an unusual brightness and kindness' - and I found much of the dialogue banal and superfluous - a bit like ploughing through an interminable episode of East Enders.

I made up my mind to read War and Peace after my Russian trip - that picture, and my ignorance of what it depicted, played a part in my decision - and I'm glad I've done so. I feel that what I've written here might have some of my dear readers thinking 'She's for a jig or a tale of bawdry or she sleeps' - or whatever. Not so. I was raised on classics and Victorian verbosity (Whymper's Scrambles Amongst the Alps before I was 10, for example). But the combination of a novel that, in Simon Schama's words, 'you don't just read, you live' and an entirely superfluous and inelegant translation leave me, I'm afraid, as cold as the retreat from Moscow.

Now, what shall I read …?
Posted by Christine McIntosh at 6:13 PM