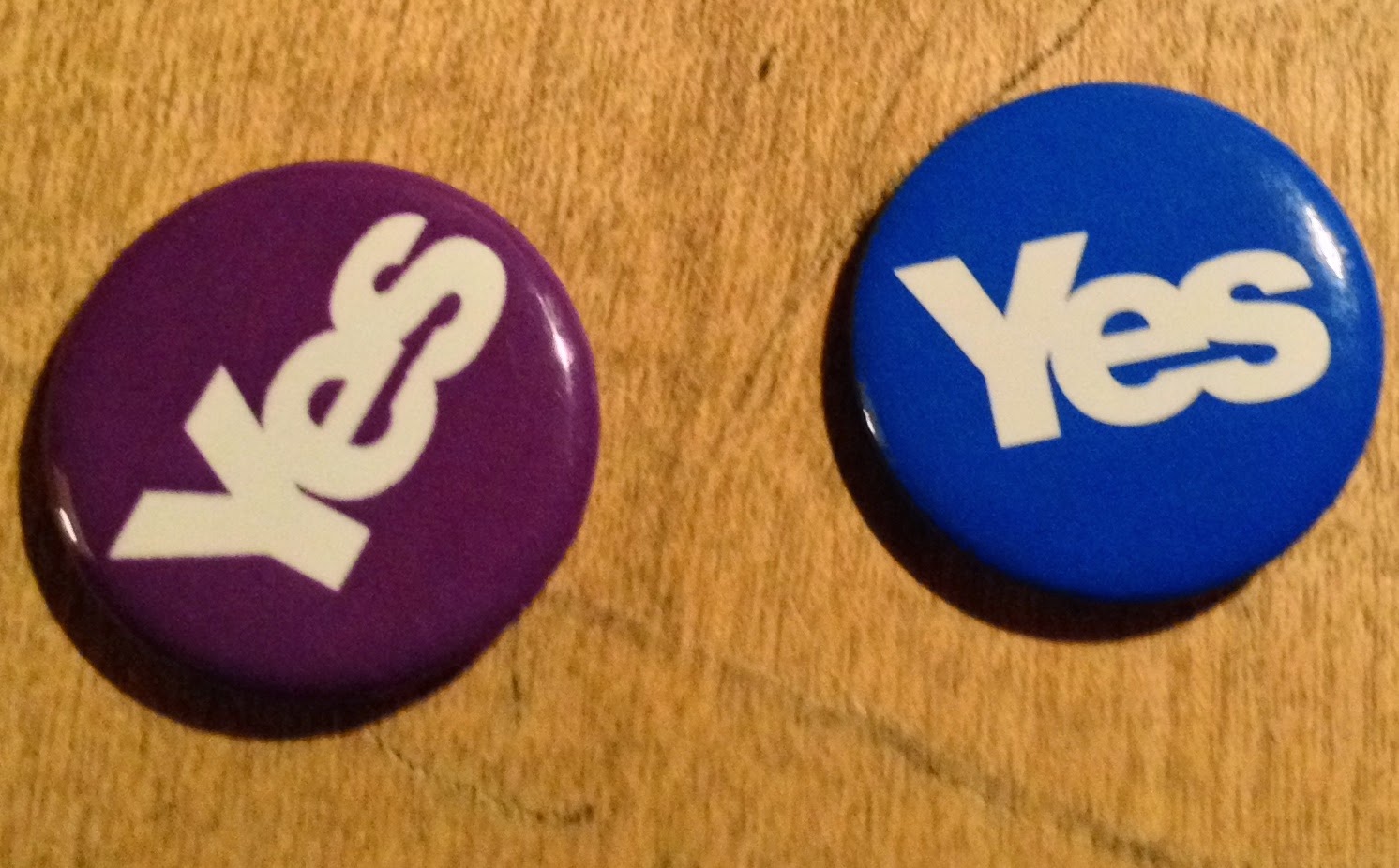 By the time I have finished writing this post, the polls will have closed. In fact, I shall shortly stop writing so that I can watch the 10 o'clock news, not because I expect to learn anything new about the Referendum Poll just closing all over Scotland, but because I feel I'm living through a moment in history that I can't bear to miss.

Today I voted YES. Actually, I voted ... what? three weeks ago? Because I had a postal vote, left over from a previous election which clashed with a holiday. I felt excited when I posted it, and I felt excited today, all over again. Not that my local polling station gave much sign of its huge importance in  today's events - it's a dreary place, in a rather dull street, and there is little on the pavement outside to lift the heart.

Today I voted YES. And in that vote, and in my hopes, are all the memories. Memories of the first time I began to feel aware of the effect on my life of the policies that I had always imagined affected ... other people. I shall never forget the sudden pang of realisation that I had brought my young firstborn baby to live next to a foreign nuclear submarine base: the US Navy's Site One. When that first child was joined by a second, I was on the road to activism. Throughout the miserable '80s I demonstrated, made speeches, appeared on radio and television and went to court as an expert witness in several trials of Greenham Women arrested when they came to join us in demonstrating against the Holy Loch base. I picketed polling stations; I leafleted countless households. Always the word came back: What can we do?

I remember more. I remember hearing a British Naval officer addressing a meeting in Ardentinny Hall, telling us that in the event of an accidental explosion at the Coulport base across the loch, Glenfinart Bay would somehow, miraculously avoid the blast as there would be a ... dent, a distortion of the blast circle. I remember the day Thatcher was re-elected, and the despair I felt; I remember drinking champagne in the sun that day in 1997 when Tony Blair was elected, and I remember the fading of that hope as his government ploughed on, betraying all that we had hoped for. I remember marching with thousands through a frosty Glasgow, protesting against the Iraq war. It happened anyway.

I remember too that day I stood on the Royal Mile watching the strange assortment of people that told us Scotland had its own parliament again - the Queen, Donald Dewar, Sean Connery. The Red Arrows thundered overhead. Something was changing. And of course I remember - how could we forget? - the day we learned that something else had happened against all expectation, that the SNP had won an overwhelming majority and that we were bound to have a referendum.

All this streams behind us tonight. Whatever the result of this closely-contested poll, we will never be the same. We have engaged with the issues in an unprecedented fashion and we have grown in confidence as a nation. I hope personally that the fearful have not prevailed this night, and that our new hope and new alignments will carry us forward from tomorrow morning. But even if the NO vote wins, we cannot go back to the old certainties, the old obedience.

And as I finish, I can be proud that the children I so feared for in their infancy have grown into the men they are - one with a vote today, the other disqualified by living elsewhere. My vote in this Referendum began with them, and the future is theirs.
Posted by Christine McIntosh at 11:03 PM

Email ThisBlogThis!Share to TwitterShare to FacebookShare to Pinterest
Labels: "Scottish Independence", indyref, memories, Referendum, Scotland, the future, the past, voteyes