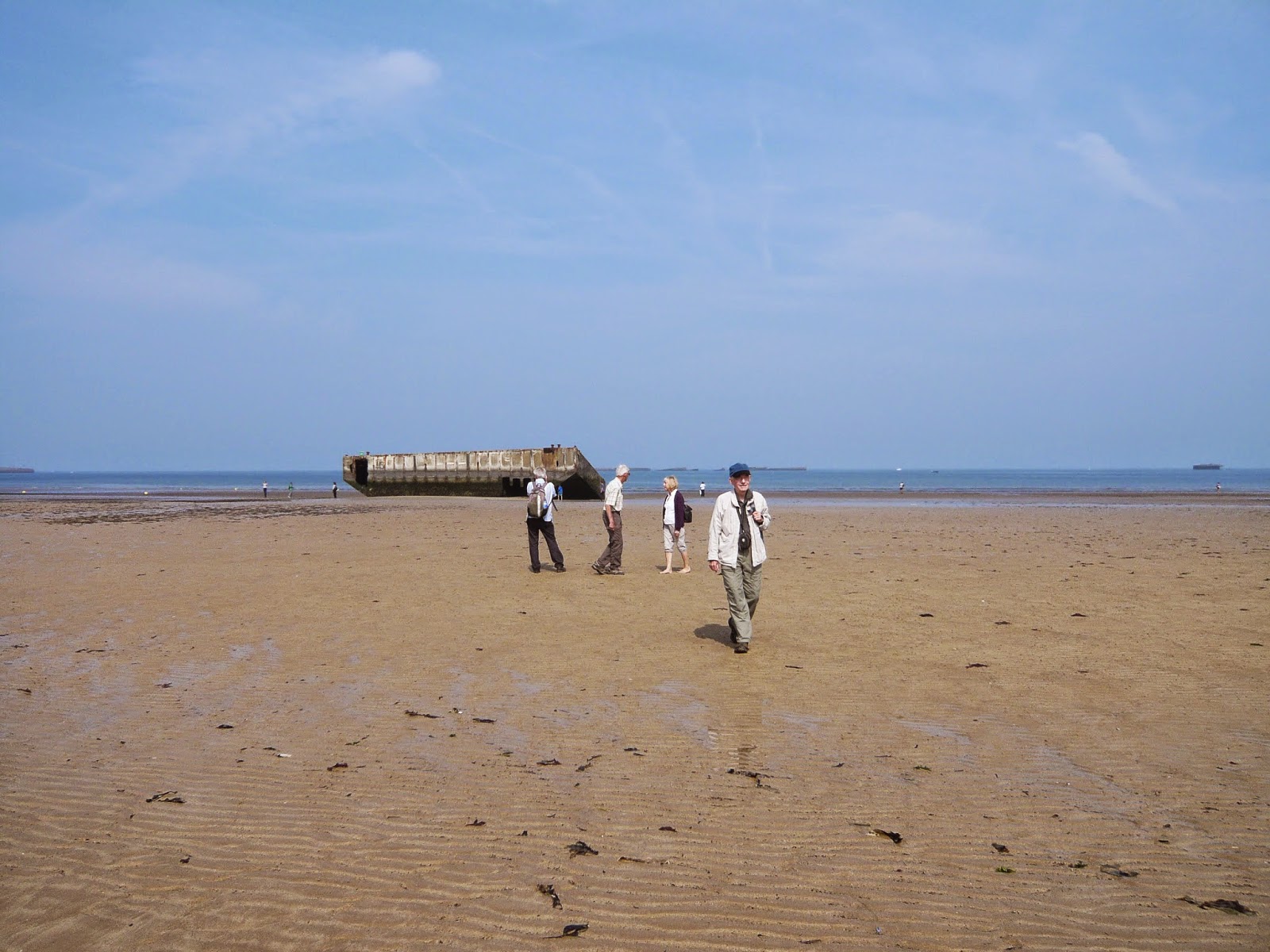 Our first full day begins early. (We soon discover that this will be the norm throughout - brisk breakfasts and trotting toilettes). It is more or less dark when we get up, with that chilly, mist-laden dawn that characterises the early morning in France where mornings are earlier than they are in Scotland because they're not really far enough east to justify being an hour ahead. But I digress. We drive through misty fields with picturesque rolls of whatever crop it is they grow in these parts and find ourselves on the headland above the small town of Arromanches. This is where most of the British troops came ashore on D-Day, and where the Mulberry Harbour was built to allow equipment and supplies to be brought ashore. Several bits of the harbour remain visible in the sea as well as abandoned on the beach (above).

The visit takes on what will become a familiar pattern: an overview, a museum visit, extended free time to explore and ponder. I add to this the pressing need for coffee and insist that a small cafe across the road from the museum should be our first stop. There is something wonderfully sinful about lunching on an espresso, a bottle of water and a crêpe au caramel salé ... 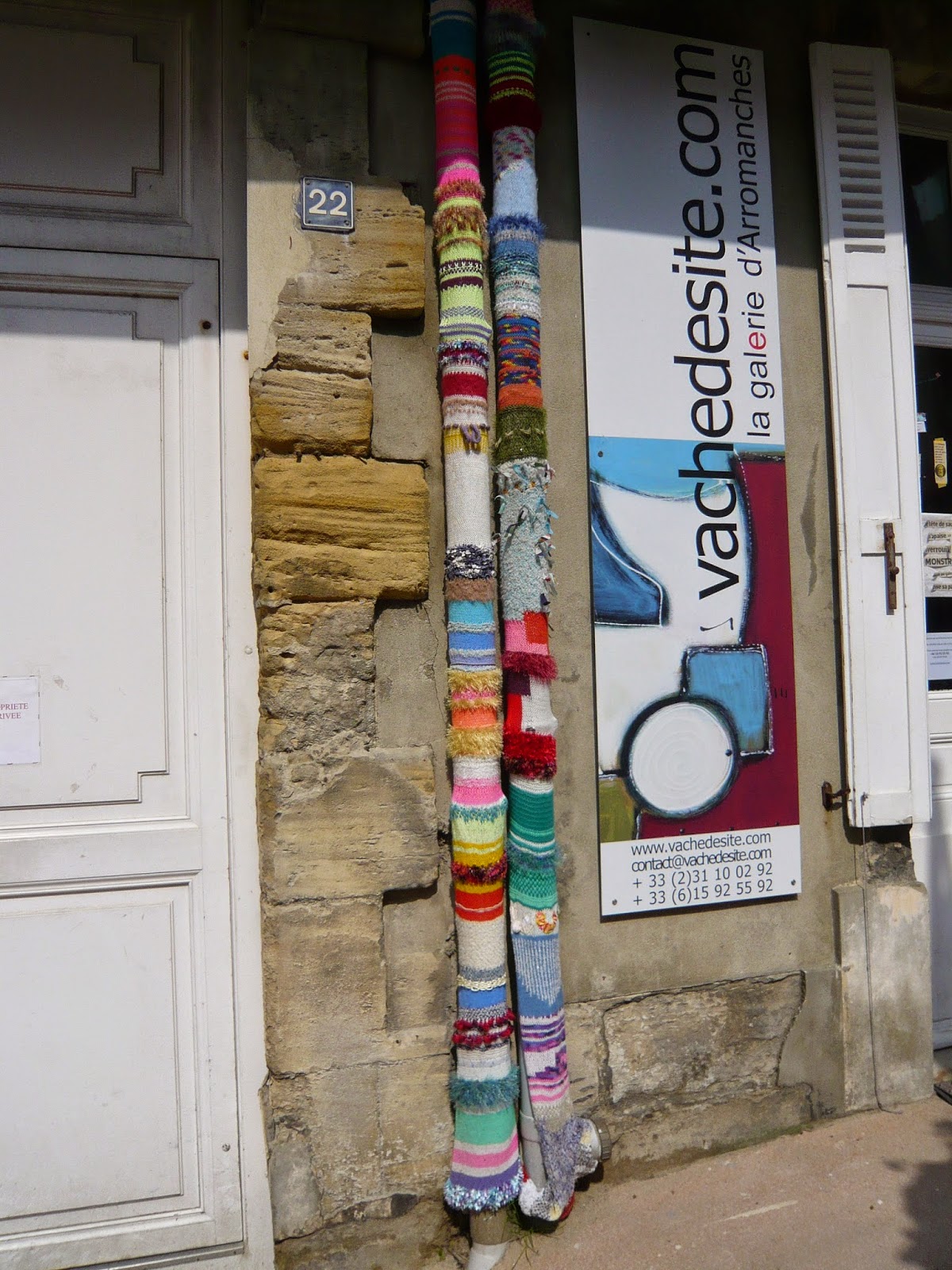 Four of us, feeling relatively lithe and fit, set off through the town towards the headland. We pass several of our fellow-Fahrters eating substantially in various hostelries, but do not yield. We clamber on a concrete gun emplacement, we walk along a cliff path that is forbidden because of erosion. No-one falls off, and we return to the town for a small pichet of rosé before the coach drive to our next visit, noting as we go that several objects along the shop fronts are cosily wrapped in squares of ... knitting. I know. I don't get it either.

The remainder of the afternoon is spent visiting the German war graveyard at La Cambe. This site was developed between 1958 and 1961, with a great deal of work being done by an international youth camp in 1959. Now more than 21,000 German soldiers are buried here. I found it a sombre place; the graves are marked by flat dark basalt lava plaques about the size of an open book, and watched over by groups of low crosses in dark stone. We are so accustomed to seeing movies like The Longest Day and Saving Private Ryan, where the German soldiers are anonymous figures to be killed or captured by the invading Allies; it is all too easy to forget the humanity of individual boys and men who fought in their thousands and died far from home. Albert Schweitzer said "the soldiers' graves are the greatest preachers of peace", and on the plinth below the heavy cross at the centre of the cemetery there is an inscription which ends with the words: Gott hat das letzte wort. This was one of the places where I felt an overwhelming need to be on my own, and I wandered far, looking at the stones where two or even three names were recorded together. Several were dedicated simply to Ein Deutscher Soldat.

The day ended not in pious reflection but in raucous singing of songs associated with the period of WW2. Several years ago, when we paid a similar visit to the battlefields of the Somme, I thought I would find this jarring, but realised that we were no different from the soldiers who would celebrate the fact that they were still alive by being ... themselves. The Château rang with the noise until well on in the evening and I was glad we were sleeping on the top floor. As I went to bed I could hear an owl among the trees outside and then it was silent. Another early start awaited us ... 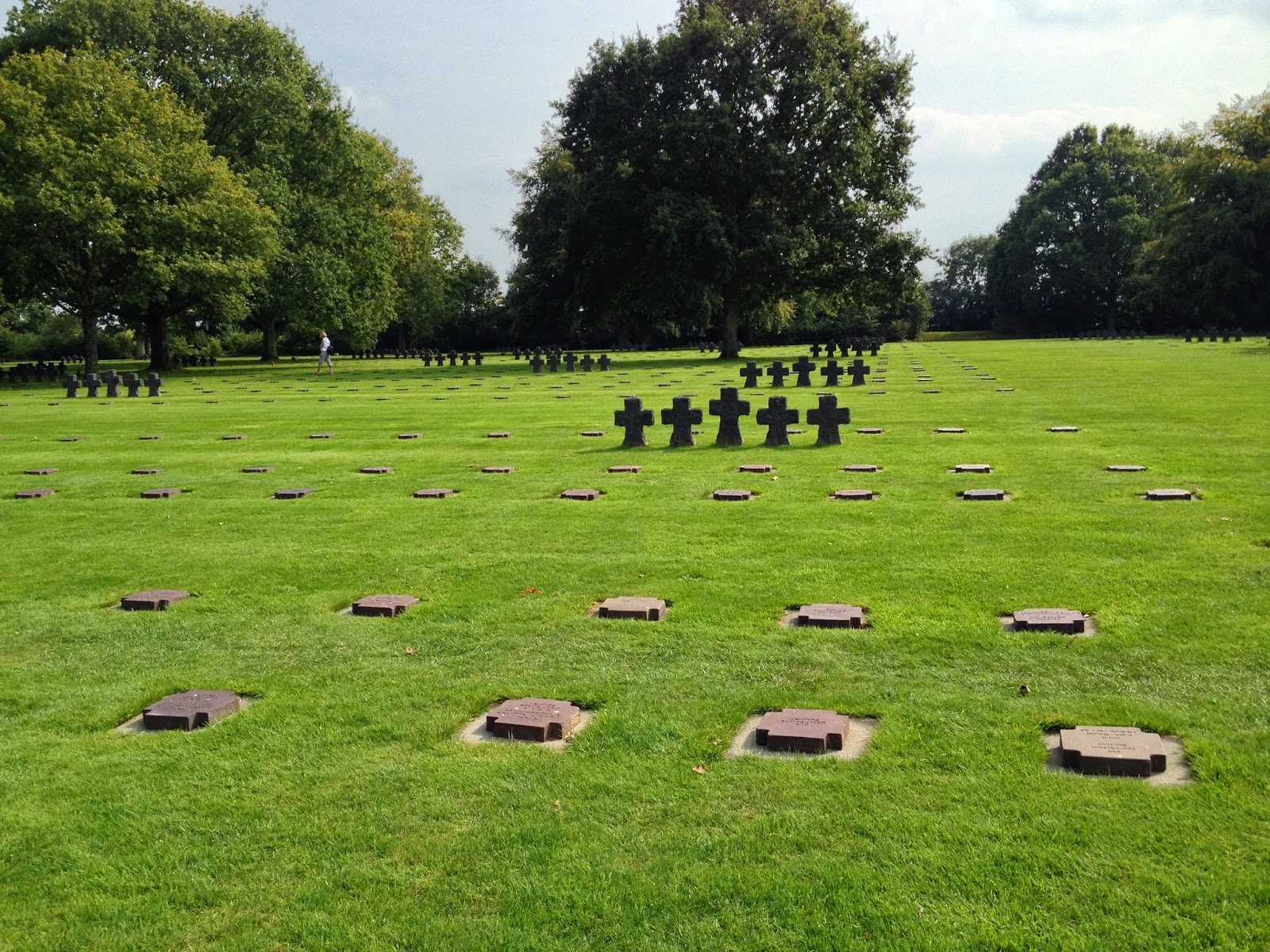 Posted by Christine McIntosh at 1:25 AM