Being Wilma, or a day in the life of a church organist. 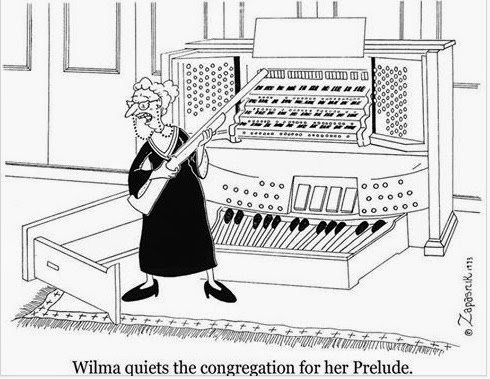 I shared the joke on the right the other day, on my Facebook page. Dead funny, eh? Wee Wilma with her big organ and her shotgun. Snigger. But it got me thinking, and then I was talking to an organist. (I do this frequently, you understand). And what follows is the result of my chat, and the sniggers we shared about Wilma - a joke I first saw on the timeline of another organist of my acquaintance.

Now we can't tell from this picture if Wilma is any good at the organ. After all, she's a wee old wifie who'd be fair game for a sneer anyway. But that's not the point. This is:

If the organist plays a prelude (the music before the service, if it's not a familiar word) he or she (I shall give this dual gender up from now on - take it as read) has probably taken time to choose what to play (I can't do that one again - someone will notice I did it last week ...) and had a bit of a practice at it. If she wanted to use the pedals, that would probably mean spending time in the unheated church (midweek church is usually baltic) because she doesn't have an organ in her sitting-room.

Sunday comes, and Wilma is there early enough to change her shoes and get her music out. She may have to put the hymn numbers up as well, but she hopes someone will be there to help with this. Five minutes before the service begins, she sits on the organ bench. There is bedlam in the church as people greet one another loudly, argue over whose turn it is to read, or just catch up on the week's news. She starts to play, straining to hear the quiet passages above the noise. It's still noisy as she finishes, but as if by magic the very fact of her ceasing to play quietens people - because someone will likely announce the first hymn any minute now.

And that's only the Prelude.

By the end of the service, the valiant Wilma has played five hymns and accompanied the singing of the Liturgy. (We're in a Pisky church ...). Depending on the preference of the celebrant, the procession will either wait for Wilma to play something else (a Postlude) or will start processing in the expectation that she'll get going in a moment. So Wilma plays again. This week, she's playing something rather beautiful by Orlando Gibbons. Last week, she hadn't had time to look out something and instead extemporised on a tune that had been used for a hymn. She has a gift for improvisation, but is never satisfied with her own efforts. This matters not a jot: the congregation had burst into spontaneous applause at the end. Not so this week. The Gibbons flows serenely to its conclusion and, released from prayer and politeness, the congregation gets back to its conversations.

Wilma isn't happy. She knows all too well that the Gibbons met the musical needs of perhaps two people in the church besides herself. She also knows that she could improvise tear-jerkers or rabble-rousers every day of the week, but that wouldn't make her happy either. She can't help wondering if the people who applaud one week and not the next know how insulting they are. She ponders the possibility of playing nothing outwith the actual service (and did you know that the use of "outwith" is confined to Scotland and that's why I have a red dotted line under it just now?) Would it worry people, having nothing to signify that it was time to be quiet, time to go for coffee?

Who knows. Most of all, actually, Wilma wishes one thing.

She wishes they wouldn't applaud.
Posted by Christine McIntosh at 4:11 PM