A visit to Hell 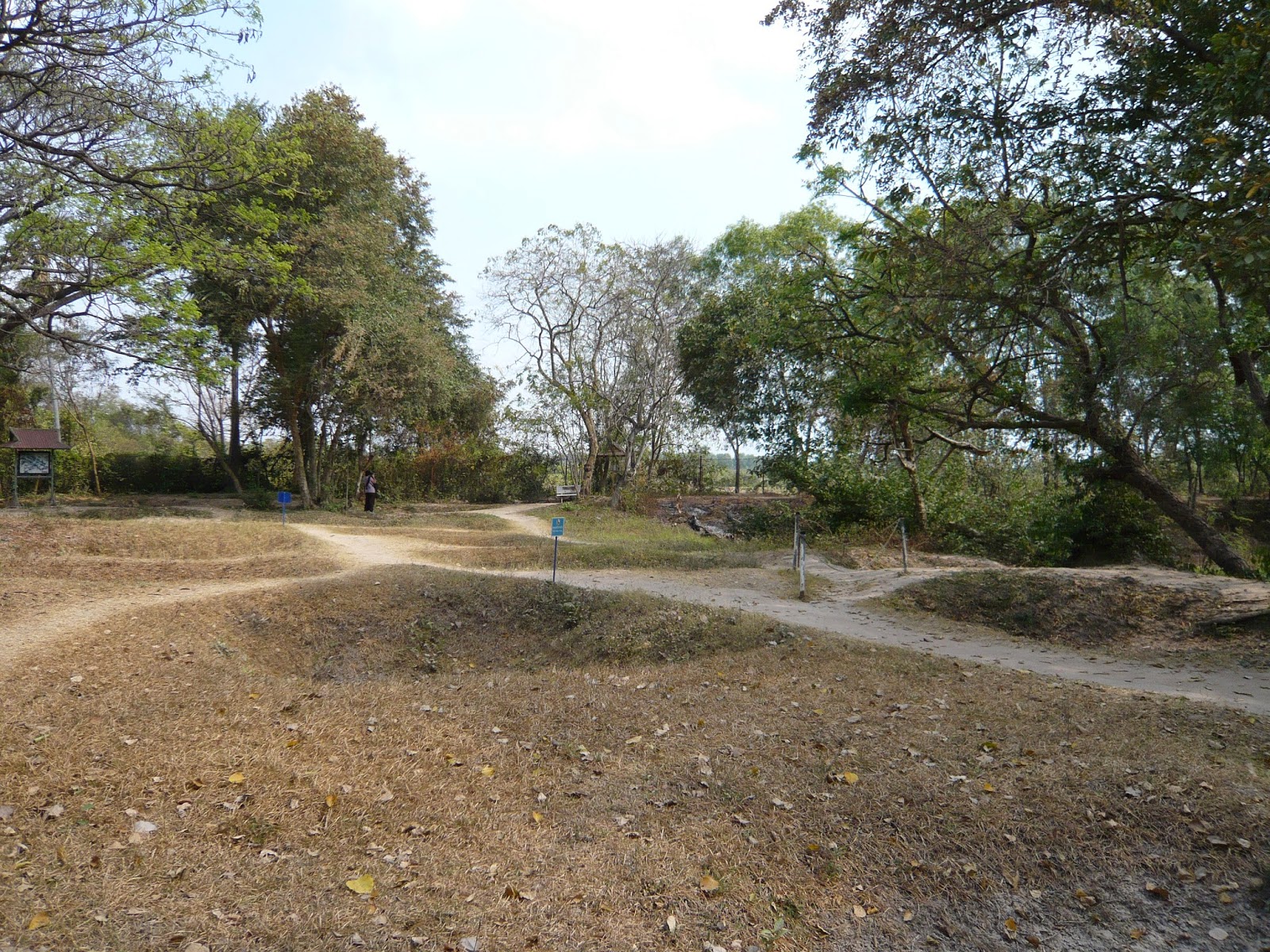 I've been putting it off, I realise - but now, before I allow it to fade in my mind, I have to write about my visit to Cambodia's Killing Fields. That's a sort of general name given to, I believe, more than one location, but the one we visited was near Phnom Penh, where a memorial park has been built around the mass graves of many thousands of victims. The "Killing Fields" name came from journalist Dith Pram, whose story was told in the film of the same name; the place we visited was called Choeung Ek.

And that's the history, briefly, and that's all we might have heard had we been with one of the other guides, the young men and women who looked after the other three groups every time we toured off ship. But our guide was older, probably in his mid-forties, and our guide had been there, in the heart of the process that the regime of Pol Pot initiated. This is really his story.

His name was Buntah, and that name was one of his first losses when the soldiers came for him. His family had fled Phnom Penh when the Khmer Rouge arrived; his father was a teacher and would have been a target for the usual rounding-up of intellectuals. Fortunately, his father's hobby was carpentry, so he was saved by the callouses on his hands in the first few encounters with terror. They settled in a village, and life went on. Buntah had seen how some of his friends had been taken away by groups of soldiers, and told his mother he was scared it would happen to him. No, she said. You're too small. He was seven.

One day he had come home from school and was waiting for his parents to return when the soldiers came. Come with us, they said.
Can I wait to tell my parents?
No, no need. Come.
Buntah asked permission to go back into the house for a moment. He left his red cap on a table, a pre-arranged sign, and went with the soldiers. He never saw his parents again, and has no idea where they are buried. He was seven.

The next three years gave him the nightmares that had kept him from sleeping the night before this first trip with us, that wakened him every time he knew he would have to relive them for others. During that time, he forgot his name, answering only to the name the comrades gave him. At ten, he learned to use an AK47 rifle. After the lesson, the older soldier told him that someone would start running over the field in front of them. Try to shoot him, he said.
I don't want to do that.
All right - give me the gun. You start running.
And Buntah took aim, and succeeded in shooting the running fugitive. It took him 28 shots. He felt bad about that. 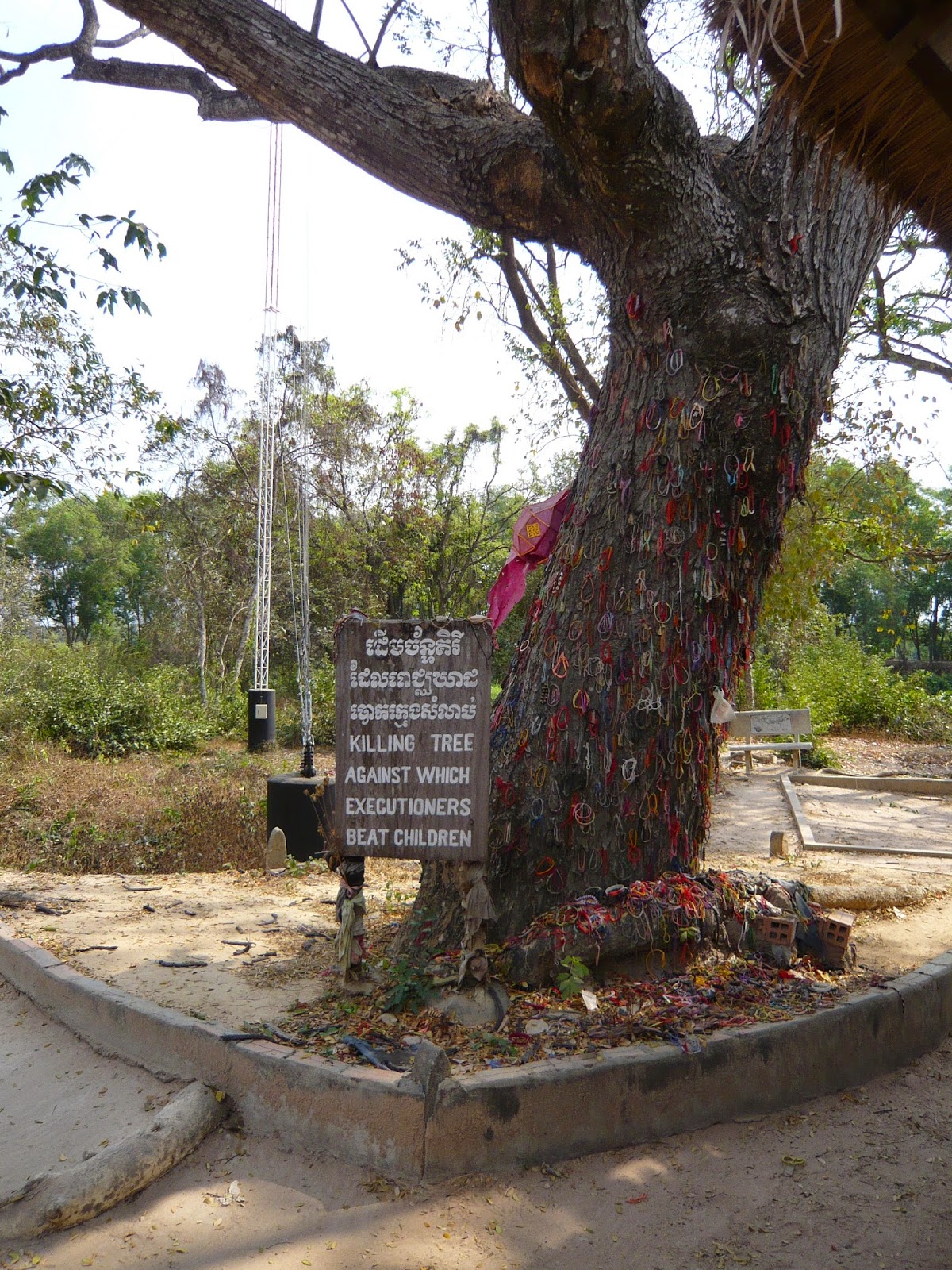 This child, this primary-school-aged child, served at Choeung Ek, and at Tuol Sleng, the notorious prison created in a Phnom Penh school. He told us how victims were killed - not shot: that would waste ammunition. No, they were clubbed and their throats cut. His voice broke several times as he told us of these things, especially when we came to the tree where infants had their brains dashed out.
Strangely, it seemed, he was smiling one moment and weeping the next. I didn't understand the smile of embarrassment until it was explained, much later.

We stood on the iron-hard dry earth of the paths between shallow pits from which hundreds of bodies had been retrieved. We had to watch our step: the rainy season washed the paths away and exposed more bones every year, bones which had become 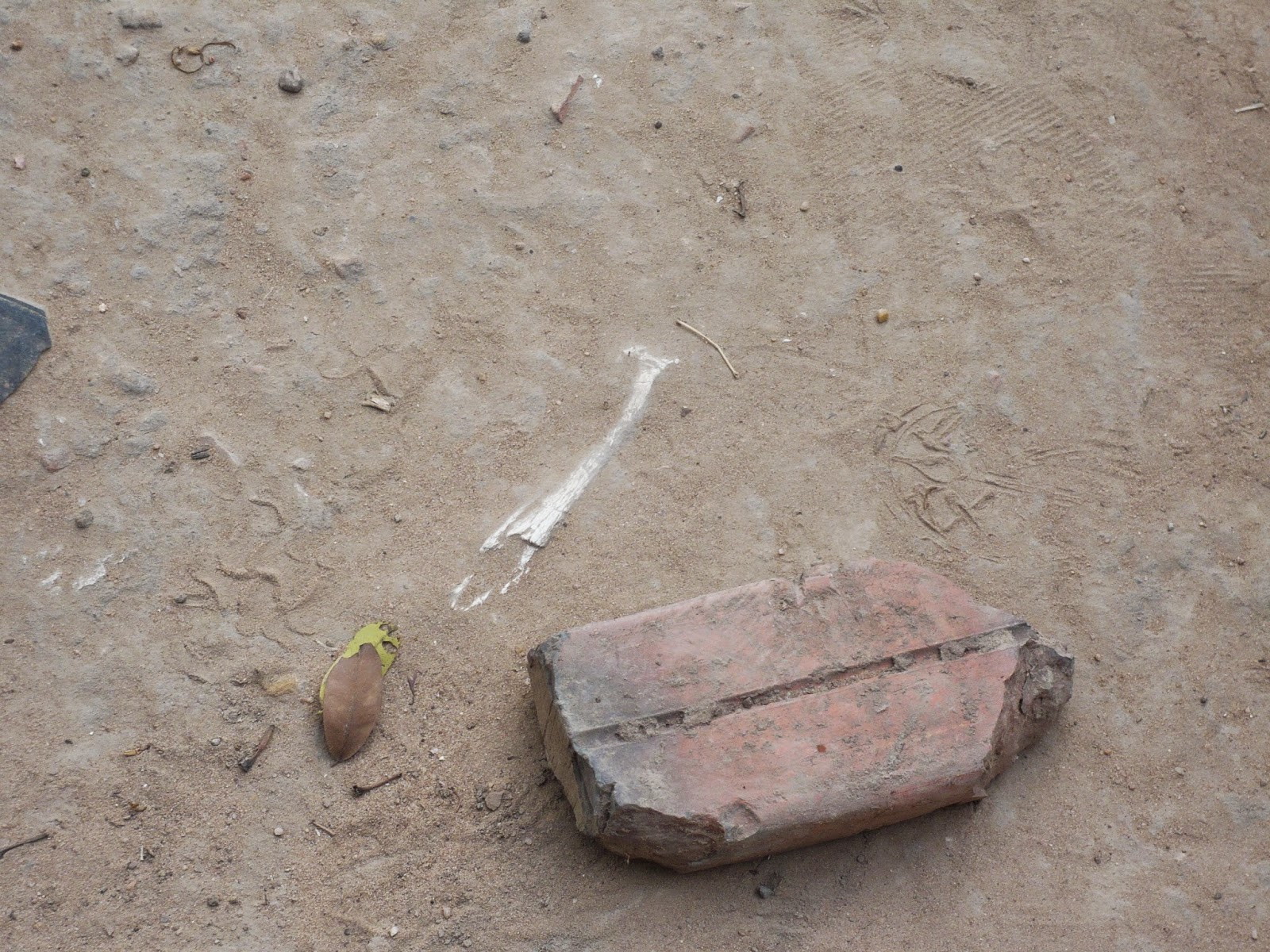 set as in concrete. They would be rescued when it rained again. There were shreds of black clothing; a tattered jacket hung on some wire. If we looked up, the surroundings were beautiful with blossom and trees, while at our feet it was entirely hellish. None of us spoke; we couldn't even look at one another.

Later, at Tuol Sleng, Buntah told us how he'd had to help with the torture of high-ranking prisoners. Every so often, his pronoun would change - from "they did this" to "we did this". Every time he did this, I shivered. He told us about the scar on his shaved head - how a comrade had battered his head with a rifle because he'd caught the boy eating grass in his hunger. Stealing even the ears of long grass was a crime against the regime. He had lain unconscious for hours before crawling to a hut. It was never stitched. We could see that for ourselves. He was ten years old.

It was malaria that saved him. When he became ill and couldn't work, he was discarded. A woman took him in, looked after him. When he heard that the Vietnamese army was coming, he fled into the jungle. He lived. He was discovered by a cousin, who called him by the name he'd forgotten after being brainwashed. The cousin and Buntah were the only survivors of a family of 14. Buntah had to take up school again, learning at 13 the things he'd known six years earlier. He spent a year in a Buddhist monastery, repenting, meditating, studying. He learned English and now teaches his neighbours in the evenings. He has a wife and a son, to whom, one day, he will tell his story.

But I think the repentance for what he was forced to do as a small boy is a life sentence. His work condemns him to remember - and this kind of work, guiding tourists, is coveted in a country that is still so poor. So we were the agents, that hot morning, of another bout of nightmares and self-flagellation, a hot morning that changed us all.
Posted by Christine McIntosh at 1:56 PM