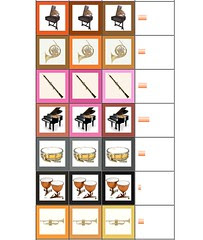 syninst2.jpg
Originally uploaded by goforchris.
Having become interested once more in the synaesthesia which I apparently have failed to pass on to my offspring, I found myself thinking about the tests I took yesterday. I was in the middle of the first, longest test - the one to establish what colour I associated with each letter of the alphabet - when Mr B came into the room and started listening to orchestral tracks on his computer. At first I paid no attention - if I attended to every piece of music played in this house I'd go off my head - but realised after a minute or so that it was affecting my response times on the button to select the colours on the spectrum. He put on headphones and I reverted to my previous speed.

When it came to seeing the results, there was a selection of letters and numbers where I'd obviously mismatched one out of the three chances I had with each grapheme, resulting in a bigger mark in the RH column (see example in pic) and a higher final score: the only score, in fact, where I was slightly above the 1.0 figure which the testers had set as the level for true synaesthesia.

The possibility that in fact it was the interruption of the orchestral sounds which clouded my inner vision occurred to me when I noted that my lowest score (0.485) indicating the highest degree of synaesthesia came after ascribing colours to the same tune played on several different solo instruments, as well as a rhythmic motif on snare drum and timpani. You can see some of the correlations on the screen shot I've included here (I realised no-one else is allowed to see my results on the link I gave yesterday): I found the piano harder than some of the others because of the complexity of timbre.

Apparently non-synthetes asked to use memory or free association in this test typically score in the region of 2.0. You can see the rest of my test results in a series of screen shots on my flickr set Synaesthesia
Posted by Christine McIntosh at 11:49 PM