Hats from the past 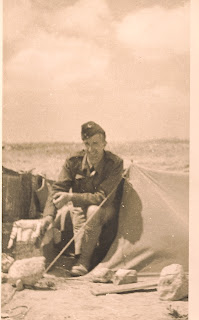 It's amazing how one - or at least I - can become obsessed with a subject. I've always known this - at least from the period of Ancient Rome, closely preceded by Alpine climbs and climbers of the late 19th and early 20th centuries, both of which dominated my early secondary school career. Right now, of course, it's Letters from the past, the Desert War (no letters - all destroyed) and the last months of WW2 as seen through the letters of my father.

This morning it felt as if my obsession was spreading. For reasons I shall not go into*, I found myself in church, at the start of the service, standing with the small children who have so miraculously appeared in our congregation. They, and I, were wearing strange hats, kindly handed out by Andrew. As if by magic (no, I know it isn't - he reads blogs) he gave me a hat just like the one in the photo on the left, which shows my father sitting in the door of his bivvy somewhere in the Western Desert, probably in 1942. It felt absolutely right to jam the RAF forage cap on the side of my head, not just because I'd been uploading this photo the other day but also because when I was a small child I used to play for hours wearing father's forage cap. (There was also a proper, hard, peaked cap, but I didn't like it as my head was too small and it tended to birl round on the top of my pigtails as if it had a life of its own).

Maybe it's a sign of age that the past suddenly becomes precious - but I wonder what that formidable intellect with whose words I am working would make of all this.

*Oh, all right then. Andrew was introducing the theme of "calling" by getting people to assign roles to hats. If you get me.
Posted by Christine McIntosh at 6:35 PM