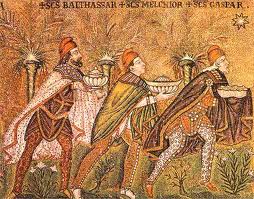 Journey over, eh? The Magi - and I love this picture of them, with their anachronistic clothing and their impatient gait as they press forward with their gifts - have arrived at the place where the infant lay, and have presumably gone again, returning "by another route" to their palaces on slopes, as Eliot puts it, changed men who had to face how they would live after such an experience. And we, their descendant Gentiles, will in a couple of days find ourselves at the Baptism of Jesus, a baby no longer but a mature man facing the call of God to do something extraordinary.

I've been thinking about this as I prepare a sermon for Sunday, and the idea of living through change in oneself has taken over. I can remember how overawed I became shortly after finding I was expecting my first child - I was standing at a bus-stop in Clarence Drive when I was suddenly overcome with the enormity of the changes this as yet invisible child would produce in my life. (If I'd known it would involve leaving the West End of Glasgow and living in Dunoon I might have panicked even more, but there you are). But now, all these years on, I look back calmly and with huge satisfaction at the way it all panned out: what was I afraid of?

Only thing is, I don't think satisfaction is what it's about. Not this change, not this Epiphany. I have a worrying feeling that it may be about continual growth, continuing challenge, continual willingness to try, to accept, to move on. Tonight I noticed it was significantly lighter at 4pm than it has been. Hibernation is not an option, is it?