The parental role in education 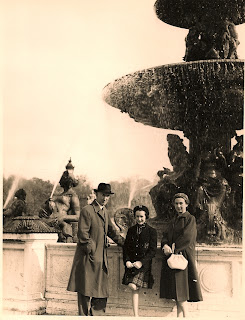 The radio was on this morning, wittering away in the background, when I caught a few sentences and realised that Call Kay was inviting us to consider the role of parents in their children's education. I didn't listen for long, lest I be tempted to contribute (I have phoned this programme twice in the past - don't want to get a name for myself) but it started a train of memories. Hence the photo. It was taken - by me, as I'm not in it - in Paris. I was 14 at the time, my sister 11. I know this because I can recall my mother telling some French waiter that we were "onze et quatorze" - and so right in the age range that I can remember most vividly when it comes to thinking about school, homework and study.

The chat on the radio today was looking at the perceived failure of state schools adequately to prepare their students for the competition to enter the top universities, and asking how much parental pressure/support/coercion was needed to supplement the work of the school. As a teacher, a parent and - a long time ago - a child, I think I have quite a rounded picture of this - but in this post, I'd like to share the part my home played in ensuring that I succeeded in what I set out to do.

By the time I was ten, we lived in a Victorian terraced house in the West End of Glasgow, with four bedrooms and two public, as well as a large kitchen, a wash-house and a lined loft. Loads of room into which one could vanish - but in winter it was cold, and we tended to live between the dining-room and the kitchen. That meant piano practice was less assiduous than it might have been, but was generally done before the evening meal - perhaps on the premise that food would replace the heat lost during practice. Dinner was over by 6pm - both parents were teachers, both home at the same time as us. For the next three hours, my sister and I sat at the dining room table and did homework - and there was always a great deal of this. (We were at a grant-aided selective school, and we could be asked to leave if we didn't work). Until about 7pm, we weren't allowed to make a noise. In fact, I got hell once for throwing a pencil down on the table, as my father had fallen asleep in his chair and I woke him.  Once his post-prandial kip was over, however, we had two hours in which both our parents took a hand in our struggles.

Father was always deeply critical of the teaching in the English department of our school, so we had a great deal of incredibly thorough input on texts we were studying. That went without saying. What was more remarkable, I thought, was that he would also work out from first principles what was going on in the Physics problems I had such trouble with - sums involving moment, I recall with horrifying clarity. My mother, meanwhile, would sit down with my tiny, battered copy of Caesar's Gallic Wars or, later, Virgil's Aeneid (Book 2) and, as she put it, "break the back of it" before I set to work on my preparation for the next day's terrifying oral translation session round the class. She also pushed us to work at French, which I personally hated because of the accent involved, and made several visits at parents' evenings to ask why we had so little written homework in French (lazy teacher; fluent as married to French woman but no fire in his chubby belly). That holiday in Paris, by the way, was by way of encouraging me at the end of S2 - I can still remember the chagrin when the lift man in our hotel corrected my pronunciation of "quatrième".

All this must have taken an enormous amount of dedication and energy on the part of two people who had already taught for a whole day - or even the half day done by my mother, who would then have had to shop (no car, so limited to what she could carry each time) and deal with our sizeable and dusty-corner-ridden house. There was no thought that my sister and I should do housework, other than during a holiday. But perhaps the biggest single contributing factor was the absence of a television. Despite my sense of deprivation at never having seen Quatermass or Emergency: Ward 10 my father refused to have a set until I had graduated (I lived at home when I was at Uni). He said I'd become an addict and that would be the end.

How right he was. I'll return to this subject - I want to think about my own deficiencies when it came to fulfilling the parental role - but for now, I'll indulge my latest addiction. Another go at Bubbles HD before I head out?
Posted by Christine McIntosh at 12:01 PM