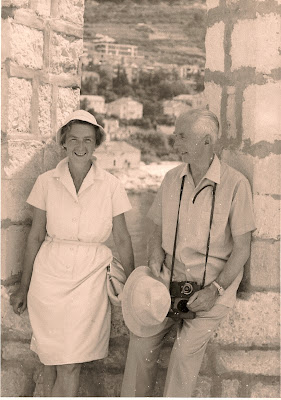 My mother, Margaret Findlay, would have been 100 years old today. She died seven years ago, and at the time I was still working, didn't write a blog and owned a computer that has since had a brain transplant - another one. So I can't find what I said at her funeral, though I was content that it summed up much of what I knew of her. But we're no longer in the place of funerals and what precedes them; I'm back today thinking of the mother I knew when she was younger than I am now - as in the accompanying photo. I think it comes from the mid-1960s, having been taken, by me,  in Dubrovnik. She is obviously smiling primarily at some remark being made by my father, who was usually behind the camera, but is giving me that familiar look of attention-while-something-else-is-on-my-mind. She loved these holidays in the sun; both my parents turned effortlessly brown without ever sunbathing and were far more relaxed and cheerful than I ever was.

A life of 93 years plainly takes more than a single blog post to recall. There are insights on the blog I've just finished, insights into the person who was there before I was born. So today I'll celebrate instead the memory of someone who was, I now realise, incredibly wise and sensible in her dealings with the world and with people. Some people have a habit of asking, in moments of stress or irritation, 'What would Jesus do?'. I find, as life flows around me in currents that pull me in directions I could never have imagined, tugging me into situations where I too need wisdom, that I have changed that question. 'What would Mother do?' I ask. 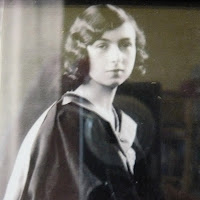 I think she'd laugh at me now. I wish she was still here to ask. I wish I'd known the serious, clever 19-year-old in the graduation picture on the right - she got bored early in 6th year at school, left at 16, got into Glasgow to do an MA, and graduated before she was 20. Perhaps that wishing is what populates Heaven for some believers - maybe for more than admit to it. But as it is, I'll remember, today especially, I'll go on trying to emulate that hard-won wisdom, I'll be glad I made her laugh, glad that she liked my poetry even though it came as a late surprise to her.

And tonight, we're having a party - her two daughters and the sons-in-law Margaret Findlay was so grateful to have. We shall drink champagne in a toast to a woman who signed the pledge in early childhood but who relented in her 80s when we began taking bubbly to her birthday lunches. Here's to you, mother - cheers!

Today I would have phoned -
wished to share the small
details of my life, the
safe return, the laughing
at the rain which fell
as if the Flood would come.
But had I rung the number
as familiar as my name
you would not be there.
A stranger’s voice would say
your words, and the strangeness
would be too much to bear.
And contemplating this
a glacial shifting in my soul
gave promise that in weeks not lived
the frozen tears would find the way
and spill into a distant sea like
drops into the ocean of my love.
May 2005

Posted by Christine McIntosh at 10:26 AM