Macs I have known

It was coming - we all knew that. It was just a matter of when. But knowing someone is terminally ill doesn't really lessen the impact when the end comes, not even when one has been with the person almost to the end. So it was, I think, with the death of Steve Jobs. And though my only connection with the man was the tenuous one of knowing that my #1 son had interviewed him once, I have been using Macs more or less from the start.

In the latter half of the 1980s, the teacher who had started the latest incarnation of the Dunoon Grammar School magazine left for another post, and the then pupil editor, one Neil McIntosh, decided it would be efficient if I were to take over from him. After all, I could check copy accurately, and I had a car - as well as being sufficiently malleable to run down the road in said car to retrieve any important kit forgotten by the editor. At that time the school had two Apple Macs sitting in the maths classroom that was the hub of computing in the school, and as I took over the pupil editorial team had decided they would start in-house publication of the Pupils' View instead of taking copy down to the local paper. Somehow they learned/taught themselves how to use Macs instead of the BBCs that had previously reigned, and the empire was born.

As these machines were, in theory, portable, and had custom-made carry-bags to facilitate carriage, we tended to have one home at the weekends, and gradually I became familiar with a mouse and such things as hypercard. When #1 son left school and started on a journalism course, he acquired his own - by now a Mac 2 Classic - which we still have, in its box, in our loft. Later, we substituted a Mac LC for the Amstrad we had at home and the ZX Spectrum on which the budding journo had started at the age of 10, and in the fullness of time connected it to the Internet.

The Pupils' View eventually made enough money to purchase its own computer, and a shiny blue bubble of an iMac appeared in my classroom. So desirable was it that we chained it to the desk with steel cables, and life was never quite the same again. I learned to use Adobe Pagemaker, and was able to teach other non-geeky types - literary, but non-geeky - to use it. The empire grew, as did the collection of Mac Classics, discarded by Business Studies and the like, along my back wall - still functioning well enough for the juniors to produce copy and my senior students to type their RPRs on. 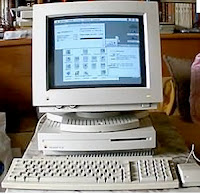 Currently, we own two iMacs - one each. Still sitting ready but disused in the loft is the LCII. I have a 6 year old laptop that saved my sanity recently when my iMac needed a brain transplant, and I have an iPad. I have used PCs - they were issued to staff for registration in my last years in teaching, and I used a friend's to upload photos and Skype home when I spent a month in New Zealand. I was able to make them do my bidding - but they seemed unfamiliar and clunky and on one occasion I and the owner of the PC were unable to locate a bunch of photos after I'd downloaded them.  I was not impressed, and had not the slightest desire ever to own one. 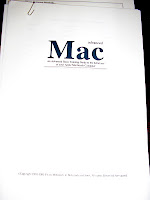 People much cleverer than I at this sort of thing seem devoted to their PCs and don't like Macs at all. But I have never had to struggle, never even had to use one of #2 son's much sought-after Mac Guides (produced about 1990). I've found that once I'd seen something work on a Mac, I've been able to do it - or even to work it out after a word at a Teach Meet or whatever. Nowadays, I don't know how I could live as I do without the communication I enjoy with people all over the world. I'd be an increasingly grouchy pensioner stuck in Dunoon with an increasingly useless passenger ferry unable to cope with travel three seasons out of four. (Don't say a word).

So, for my life as it is, I have one person to thank. That person is Steve Jobs.
Posted by Christine McIntosh at 12:07 PM