Poets in a Landscape 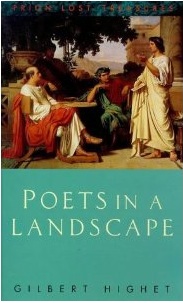 A long time ago - we're talking half a century here - I found a dun-coloured hardback book in the school library and took it out for a fortnight. I took it out again later in the year as my mother hadn't finished it when I first brought it home, and I noticed that no-one else had borrowed it in the intervening months. I suspect it was only there because the author had been a pupil at the school. Later, I was to regret not having nicked it when I had the chance, but I was an honest adolescent and it didn't cross my mind. Years later, my mother spotted the same book, reissued as a "Lost Treasure" by Prion, and bought it as a present for me, unregcognisable in the attractive paperback illustrated here. And so Gilbert Highet's Poets in a Landscape found its way onto my bookshelves in 1999, and I see that it's still possible to buy it online.

It has taken me till now to re-read it in its entirety. Maybe it's not a book to be galloped through with the voracious speed of my teenage self, for apart from the section on Catullus I recalled little of it. Highet, whom my parents apparently knew at university, draws pictures of the great Roman poets - Catullus, Horace, Virgil, Propertius, Ovid, Juvenal - in their own locations, visiting their special places in Italy, seeking out ruins and rumours, legends and literary fragments, recreating the lives they led and the people they encountered.

At the first time of reading this book, I had visited only one of the places he describes. The so-called Grotte di Catullo at Sirmione, which the poet know as Sirmio, are in fact the ruins of a huge lakeside house of a later date than the poet, but the peninsula jutting out into Lake Garda is an evocative place, and even as a teenager I found myself quoting Tennyson as I walked round 'sweet Catullus' all-but-island, olive-silvery Sirmio' - for Highet is never afraid to complement the works of the ancient poets with their more recent echoes in the poems of others.

The book takes us through the Italian countryside and the boiling streets of Rome, beside the cool springs of Clitumnus and the echoes of the now-ruined Forum, translating chunks of Latin poetry into his own, preserving the metre and as far as possible the tone, so that someone with no knowledge of Latin could still feel they were within touching distance of the works as well as the life of ancient Rome. His description of hot exploration of the Italian countryside as he sought out unremarked ruins is as powerful as his evocation of the Dark Ages, when the glories of the Palatine Hill were ruined and buried and dogs scavenged around the capitals of hidden columns. A fairly recent visit I made to Rome has left me with powerful impressions of my own to recall - including pictures painted of the period before archeologists started work on these strange mounds and apparent caverns, but above all it is the sound of the poetry that has returned.

Whether I was realising how the metre of popular songs worked - as exemplified by a line about Julius Caesar: Watch your wives, you poor civilians, here comes
Baldhead Lover-Boy!

or, as I suddenly recalled it from Thornton Wilder's The Ides of March:
Here he comes, the bald whore-monger - Romans
lock your wives away! -
or taking delight in some erudite explanation of some facet of language that I had never previously considered, this book proved a joy.

I may even get down my copy of Horace Odes (Odes lll, if you're interested) and see if I remember how the Latin works ... O fons Bandusiae, splendidior vitro...
Posted by Christine McIntosh at 4:12 PM