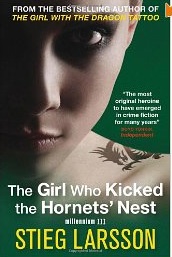 I managed, for reasons associated with where I live, not to see the film of The Girl with the Dragon Tattoo, though I wish I had and still hope to. But at Christmas, I was given the book on the left. "You like detective stories, yes?" said Ewan. And yes, I do - right back to when I began with Edmund Crispin. So I began on my Christmas books with this one, thinking "fat book, get it read before I go on holiday". But I'd reckoned - as, I imagine, had Ewan - without the travails induced by reading the third book of a trilogy in which all the characters have appeared from the start - or so I imagine - and have, furthermore, Swedish names that stubbornly resist internal pronunciation and therefore memory.

That said, I ended up thoroughly enjoying The Girl who kicked the Hornets' Nest.  Perhaps there was an element of triumph in my enjoyment, but it meant that I ended up lugging the two-thirds finished tome all the way to Dubai in my cabin bag so that I could read it on the long flight.

Apart from the intricately worked-out plot that had me thumbing backwards to find out where the clues were laid (and to check out which Swedish name belonged to which plot element) I found myself revelling in the hacking that formed the backbone of the latter part of the story. (How sad is that?) I regretted my inadequate knowledge of Swedish geography and the lack of a map at the front of this book, and I marvelled at what Swedes seem to eat for breakfast. It was such an engrossing experience that I found myself bereft beneath the palm trees when I finished it in a late afternoon after a swim, and it was hard to start on another book - which I may also review - that evening.

Several people have offered to lend me the other two books - I shall be ready to start one in about a fortnight, the way my life is looking right now. And I want to see the movie ...
Posted by Christine McIntosh at 12:57 PM