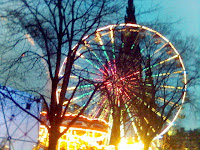 Just back from a visit to Edinburgh - a heady mix of a stay with dear friends, a meeting of the Lay Learning committee of the SEC and a visit to the German Christmas Market in Princes Street Gardens, where I took this rather low-quality pic on my phone. I would have had my camera had it not been for the horizontal rain on a snell wind as we left the car; actually we had a sufficiently long splash of dry to glug down a mug of scalding gluwein at the market stall and feel suddenly much cosier. We were not, however, tempted by the big wheel - it looked decidedly shoogly to me, and a sure ringer for a bout of hypothermia.

And the Lay Learning? I have much to debrief on this one, but came away thinking about the balance between content and delivery systems in any sphere of learning. There's a debate into which I stuck a toe over on John Connell's blog which threw me into reflecting further on this; the tension between knowledge and the communicating of same is complicated by the problem of having to engage with an audience which, unlike school pupils, can turn away and demonstrate only indifference - even harder to deal with than hostility. And the problem of sentences like that last one is that one loses the will to live ploughing through them - could do better, Blethers!

On a lighter note, a thought about Christmas carols. As we skelped home through the incipient floods on the M8 we listened to a sampler CD of new carols. After one particularly ebullient offering, we were struck by a mental image of the Christ-child, square-faced and open-mouthed, wailing inaudibly as the heavenly hosts gave it laldy over the manger. Makes you realise how very good are some of the by now classic arrangements - a case of content not matching delivery systems in many of the new ones.

We made it home in tempest, storm and wind - another quote for the carolophile!
Posted by Christine McIntosh at 10:18 PM