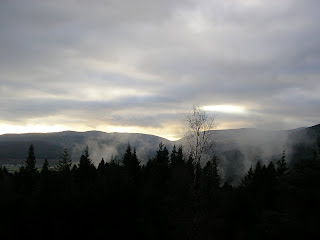 It's dark again. A dark, blowy Hogmanay with further gales forecast. Before I return to the role of Domestic Goddess for one more time - cooking for a meal with a friend - I'll join the hordes who post their look back over 2006. I hate this night of the year - have done ever since I was a child. The days may be imperceptibly lengthening, but the turning year brings with it the reflection that life ain't - let us not think after these ways: so, it will make us mad.

For me, 2006 was a big year - the trip to New Zealand, the death of my friend Edgar, the wedding of Ewan and Morgane, Neil's graduation. But it was also the year in which I made a host of new contacts - some virtual, some becoming three dimensional, like David and Andrew, who no longer needs to stand sideways for me to recognise him. I still enjoy the thrill of making new contacts online - especially if they seem to appreciate what I have to say. And I still find it amusing when people much younger than I say "You have a ... what?" I wonder if there will come a day when writing a blog is as commonplace as keeping a diary - though come to think of it it's not everyone who does that either. (I have kept a diary continuously since 1958 - quite a thought!)

That's enough. I'm off now to do wonderful things with a fillet of venison from Winston Churchill, and then I'll domestic goddess it no further. A Good New Year to you all.

For the sober and literary: there are two Shakespearian references in this post. The usual rules apply.
Posted by Christine McIntosh at 4:55 PM